Luigi Loir was born December 22, 1845 in Goritz, Austria and he died February 9, 1916 in Paris. He began his first formal art education in 1853 at the Ecole des Beaux-Arts of Parma. Ten years later he moved to Paris, where he enrolled to study with the mural painter Jean Amable Amedée Pastelot (1810-1870). Upon finishing his studies in 1865, Loir made his debut at the Paris Salon with Paysage à Villiers-sur Seine, for which he received high acclaim. Due to his studies with Pastelot, he also became a very popular ceiling and mural painter: one of Loir's first commissions was to paint the murals and ceilings at the Chateaux du Diable in 1866.

After 1870 Loir concentrated exclusively on painting views of Paris. In these works, Loir caught and expressed the many faces of Paris at all hours of the day. These displayed Loir?s exceptional powers of observation and craftsmanship and it is with these that he ultimately made his reputation. In 1879 Loir was awarded the third class medal at the Salon. A second-class medal followed at the Salon of 1889, as well as a gold medal at the Exposition Universelle in the same year. Loir was inducted into the Legion of Honor in 1898. 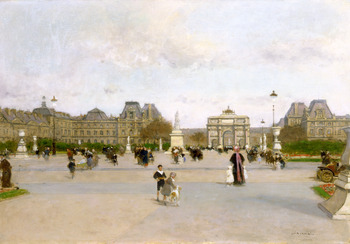 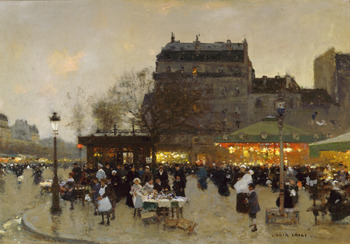 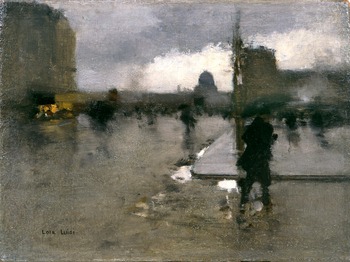 François-Joseph Luigi Loir
A Boulevard in Paris on a Rainy Day, The Pantheon Beyond
SOLD