Heilbuth regularly submitted to the Paris Salon after 1852, and through these submissions sold many works to the State--works which are now housed in the Museé du Louvre and Musée d?Orsay. Highly recognized in his lifetime, Heilbuth was awarded medals in 1857, 1859, 1861, and was lastly decorated with the Légion d?honneur in 1861 and promoted to Officier in 1881. He worked within illustrious groups of French painters, participating in 1865 in an exclusive exhibition of the Cercle de l?union des arts on the rue Choiseul, along with Delacroix, Decamps, Diaz, Troyon, Meissonier, Ribot, Belly, Daubigny, Millet, and Gérôme. In addition to his success on the continent, Heilbuth also exhibited in London at the Royal Academy and at the Grovesnor Gallery (1871-1878). 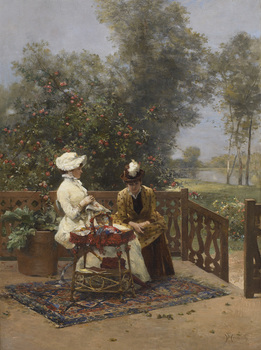