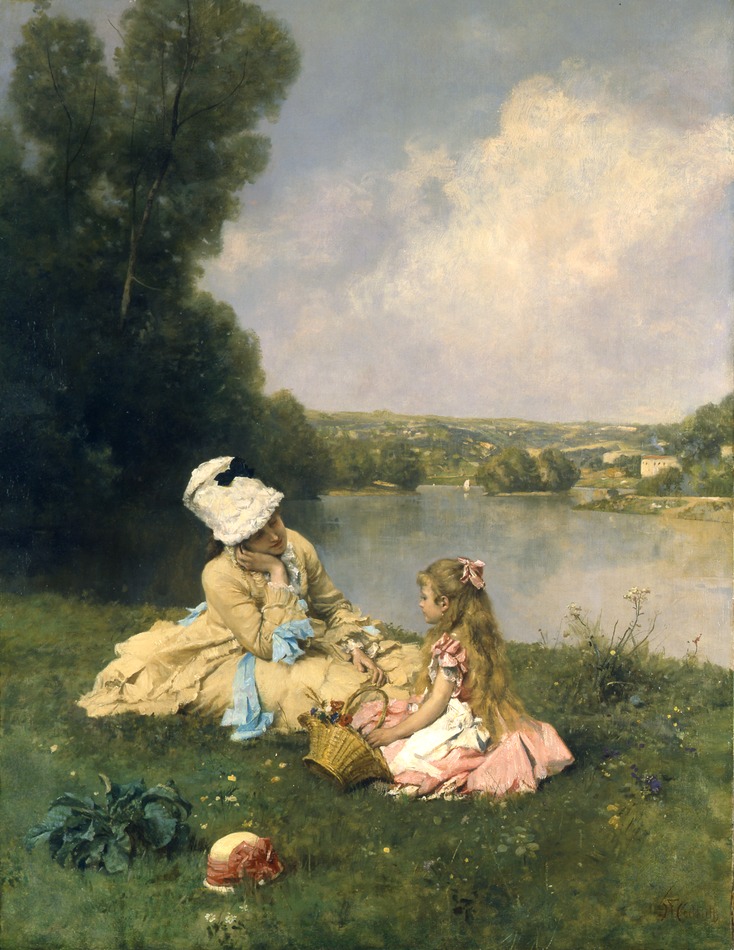 Exhibitions:
Possibly exhibited at the Exhibition of the Royal Academy, London, 1871, no. 1042 as On the banks of the Seine.

In Summer Days at Giverny, Heilbuth depicts a subject of modern leisure, popularized in the 1870s at the early years of the Third Republic. It is during these years that the increasing convenience of rail travel made places such as Argentueil and Giverny centers of middle and upper-class leisure. Painters produced numerous scenes of Parisians relaxing along the banks of the Seine, including Edouard Manet, whose influence on Heilbuth’s career should not be underestimated. The two artists maintained a friendship from the early 1870s: in an 1897 article published in La Revue blanche, Antonin Proust notes that Manet made numerous visits to Heilbuth during summer of 1870. It is during this time that Heilbuth began to paint such modern themes, quite possibly at the urging of Manet.

Such pleasing scenes of leisure and the good life were eagerly collected, both in France and abroad. The present painting entered the prestigious French painting collection of William Astor, where it hung in the ballroom at 350 Fifth Avenue. Here, Mrs. Caroline Astor gave parties, inviting and defining New York’s social elite. The capacity of the ballroom was limited to four hundred guests, the number assigned to high society by Mrs. Astor to prohibit the inclusion of the nouveau riche. As a result, the term “The Four Hundred” came to denote New York Society.

Heilbuth regularly submitted to the Paris Salon after 1852, and through these submissions sold many works to the State--works which are now housed in the Museé du Louvre and Musée d’Orsay. Highly recognized in his lifetime, Heilbuth was awarded medals in 1857, 1859, 1861, and was lastly decorated with the Légion d’honneur in 1861 and promoted to Officier in 1881. He worked within illustrious groups of French painters, participating in 1865 in an exclusive exhibition of the Cercle de l’union des arts on the rue Choiseul, along with Delacroix, Decamps, Diaz, Troyon, Meissonier, Ribot, Belly, Daubigny, Millet, and Gérôme. In addition to his success on the continent, Heilbuth also exhibited in London at the Royal Academy and at the Grovesnor Gallery (1871-1878).