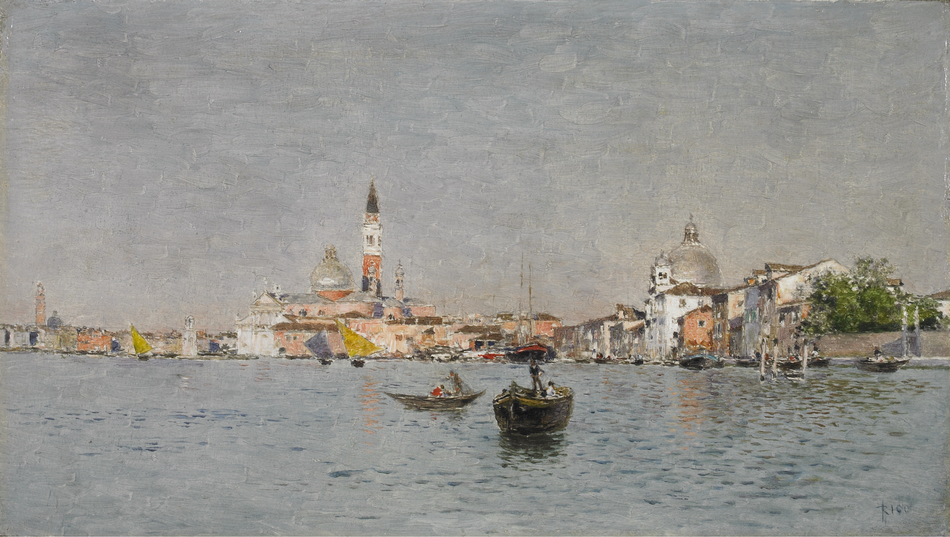 San Giorgio Maggiore from the Giudecca

Martin Rico was born in El Escorial, Madrid. His formal education was completed at the famous San Fernando School in Madrid, where he studied with Juan Antonio de Ribera and Federico de Madrazo. Soon after graduating he took to painting out of doors, first in the vicinity of Madrid, and later throughout the various regions of Spain. He won a government scholarship to study in Paris, and soon became friendly with Raimundo Madrazo and Eduardo Zamacois. Through these two influential painters, Rico made the acquaintance of Charles Daubigny, going to work in Daubigny?s studio in 1863. This proved to be a turning point in Rico?s career: he was soon dubbed by critics as ?a sunny Daubigny? and earned a contract with the well-known dealer Goupil, who sold his works internationally.

In 1872, accompanied by Mariano Fortuny, Rico toured Italy. He was enchanted by the splendor of Venice, whose sites, waters and light he captured in innumerable paintings. From 1879, by which time he had made Paris his permanent home, he spent his summers in Venice, renting a palazzo in which to paint. He would often work sitting in a gondola, sketching buildings and bridges as seen from the water. Rico?s views of the city prompted the critic Emile Bergerat to write, ?He [Rico] is a landscapist of the race of Guardí; his touch, like the Master?s, is spirited, lively, daring?.?