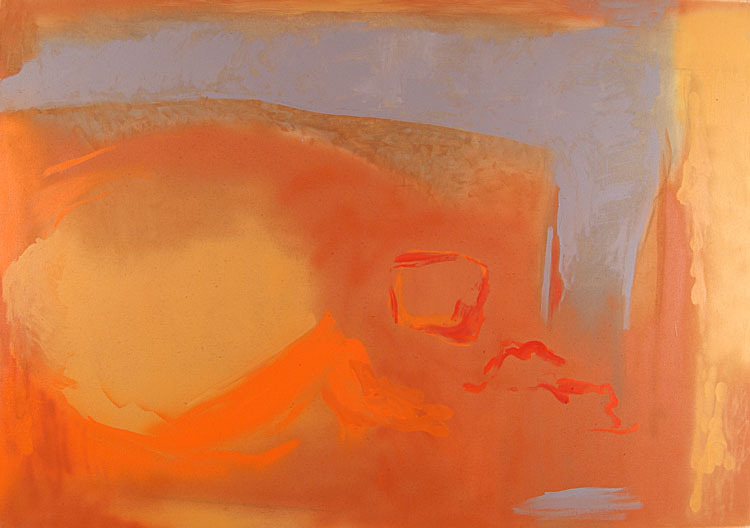 Provenance:
Estate of the artist (no. P.91/08)
Private Collection, US

One of the first generation of the New York Abstract Expressionists, Esteban Vicente was born in Turégano, Spain in 1904. After early schooling with the Jesuits, he enrolled at the Real Academia de Bellas Artes in Madrid in 1921. He had his first one-man exhibition in Madrid in 1928, after which he left for Paris and did not return to Spain until 1930. In 1935 he married Estelle Charney, an American whom he had met in Paris, and after the outbreak of the Spanish Civil War in 1936 Vicente and his wife moved to New York. The Spanish Ambassador to the U.S. set him up as a Vice Consul in Philadelphia, a position which supported his family for three years. Vicente had ample time to continue with his art and had his first one-man show in New York at the Kleeman Gallery in 1937. After the fall of the Spanish Republic in 1939 he returned to New York City. During World War II he supported himself with portrait commissions and by teaching Spanish. A 1945 exhibition in Puerto Rico led in 1946 to a position at the University of Puerto Rico teaching painting. After his return to New York in 1947 he established relationships with most of the members of the nascent New York School, participating in their seminal exhibitions at the Kootz Gallery in 1950, in the 9th Street Art Exhibition in 1951, in exhibitions at the Sidney Janis and Egan Galleries, and at all of the Stable Gallery Annuals. Subsequently he was represented by the Leo Castelli, Andre Emmerich and Berry-Hill Galleries in New York City. He was a founding member of the New York Studio School, where he taught for 36 years. He also held various teaching positions at such institutions as Black Mountain College (1948), University of California at Berkeley (1954 & 1958), New York University (1959-1969), Yale University (1960-1961) and at Princeton University (1965-66 & 1969-1972). Although he never exhibited in Spain during the rule of Francisco Franco, in 1998 the Spanish government opened the Esteban Vicente Museum of Contemporary Art in Segovia. In 1991 he was given a Gold Medal for Fine Arts from King Juan Carlos I and Queen Sofia of Spain.

Vicente lived in Bridghampton, New York and was a life long friend with all of the East End Abstract Expressionists.