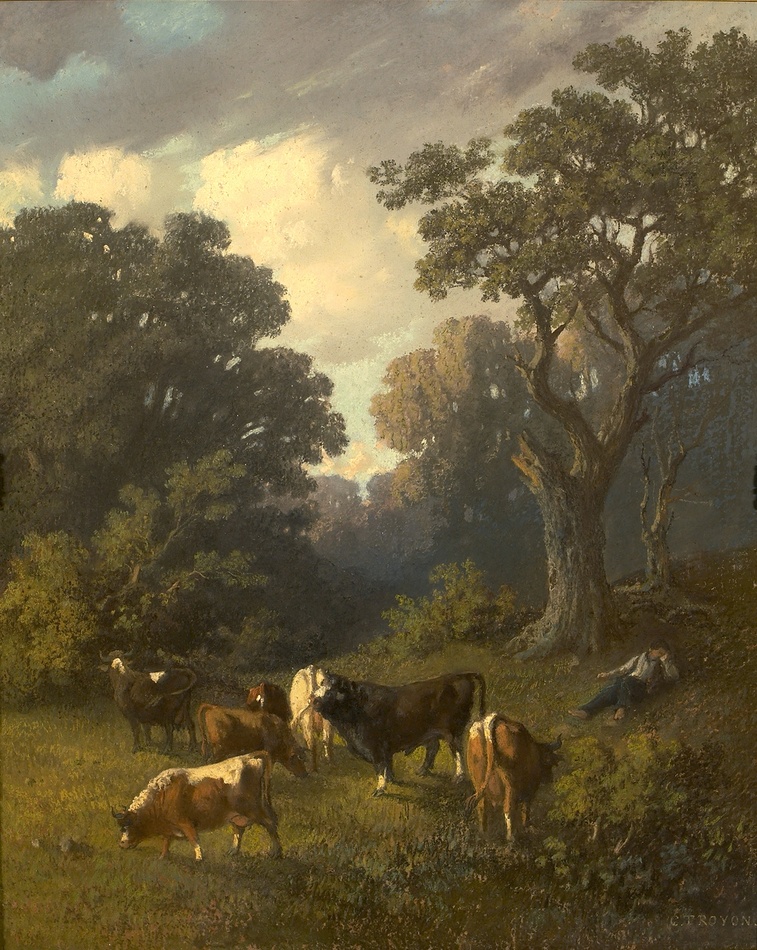 cf: A similarly composed pastel by Troyon entitled Rural Amenities and dated c. 1835-45 in the collection of the Heckscher Museum of Art, Huntington NY.

This work is accompanied by a certificate of authenticity from Michel Schulman and will be included in the catalogue raissoné currently in preparation.

Constant Troyon is best known for his large-scale paintings of animals inspired by the works of the two great 17th century animal painters, Albert Cuyp and Paulus Potter. Still early in his career, as Troyon developed from his initial training as a porcelain painter to pursue a more serious artistic path, he looked to another artistic source: the pastoral landscapes of the 18th-century. Works by artists such as Boucher or Pater, with their fête champetre scenes and view of an idyllic rural life would have been deeply familiar to Troyon, especially given his background in porcelain painting which drew heavily on 18th-century motifs. Indeed, Troyon even copied Boucher directly in developing his approach to the pastel medium: he completed a pendant pair of pastoral landscapes after Boucher in pastel (vente Bleymuller, 1877). Although the Barbizon painters are best known for initiating the tradition of plein air painting directly from the landscape motif, they nonetheless drew upon familiar imagery to develop their own mode of working. Troyon’s fellow artists Jules Dupré and Narcisse Virgil Diaz de la Pena, also trained in porcelain painting, similarly drew upon the Rococo style, as can be seen in Diaz’s gypsy groups or classical gods in the forest and the lush, fullness of Dupré’s pastoral mode.

The present work is a rare example of Troyon’s Rococo-influenced landscapes. The soft palette of pinks, green-blues and greens, chiaroscuro effects, and the soft forms of his trees recall the work of the great 18th-century artists, Boucher in particular. Troyon’s handling of the pastel is adept, and he must have particularly confident about his use of the medium considering the scale of the work: most pastels by the artist are significantly smaller.