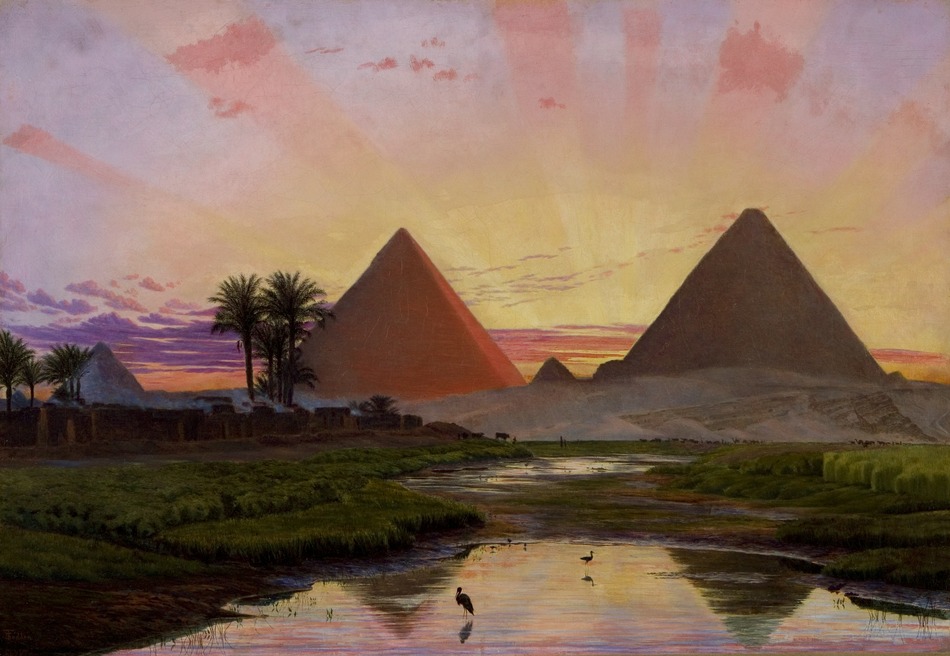 cf: A reduced version of the same composition from 1855 in the collection of the Legion of Honor, San Francisco Fine Arts Museums.

The current picture is the product of Seddon’s second voyage to Egypt in the company of Holman Hunt, in 1854. It is a view of the great Pyramids of Gizeh from the east, with the peaks of the pyramids of Khufu and Khafre burnt by a glowing sunset. Seddon was often praised for his ability to depict the effects of the region’s unique sunlight on the atmosphere and land. Both he and Hunt were interested in depicting the violet, cool color of shadows, a topic fully explored by another Pre-Raphaelite, Ford Madox Brown, and Middle Eastern light provided ample opportunity to experiment with the subject. Both Seddon and Hunt created numerous images of daybreak and sunset, focusing on the variety of color in light and shadow. Here, red-orange light reflects from the face of one pyramid and on the marshy water in the foreground, while the grassy terrain and other pyramids remain in cool darkness.

The qualities of the dusky light also provided a means for Seddon to suggest the mystical significance of the site without departing from a strict verisimilitude. Indeed, Seddon desired to represent the sites of Egypt and the Holy Land with the strictest accuracy; he wished to create a body of work that stood in opposition to Romanticized or generalizing views of the East. He once complained that in a British book on the Middle East, the same woodcut had been used to depict two different towns, and also criticized Sir David Roberts for painting the Great Sphinx of Gizeh mis-aligned with the setting sun.

A rare painter of Orientalist scenes, Thomas Seddon made his first trips to the Middle East in 1853 and 1854. The first voyage brought the artist into contact with Sir Richard Burton: in Burton?s ?Pilgrimage to Al-Madinah and Meccah? he notes that Seddon completed a painting of an Arab Sheik in full costume for him. A second, longer voyage followed in 1854, this time in the company of William Holman Hunt. Seddon was sympathetic to the Pre-Raphaelite principle of a new truth and honesty in the depiction of nature, and Holman Hunt, the greatest Pre-Raphaelite theorist and only painter to adhere to it?s methods throughout his career, found in Seddon a companion who shared his desire for an art that depicted nature without artifice and reflected distinctively English values.

Upon leaving Egypt, Seddon and Hunt continued to the Holy Land, where Seddon painted Jerusalem and the Valley Jehoshaphat from the Hill of Evil Counsel, now housed at the Tate Collection in London.

Son of a highly successful cabinetmaker, Thomas Seddon began his artistic studies as an ornamental artist. He followed this course well into his career, studying decorative art in Paris for a year and winning a prize for design in 1848. His first real paintings of the landscape began in 1849 with a trip to Wales. Trips to Barbizon and to Brittany followed in 1850 and 53, and to Egypt and the Middle East in 1853, 54 and 56. An exacting draftsman, Seddon became a founder and professor of the North London School of Drawing. John Ruskin described Seddon?s work as ?the first landscapes uniting perfect artistical skill with topographical accuracy.? Seddon caught dysentery during this third trip to the East, and died in Cairo in 1856.

Museums:
Tate Collection, London: The Mountains of Moab, 1854 and Jerusalem and the Valley of Jehosephat from the Hill of Evil Counsel, 1854-55;
The Ashmolean Museum, Oxford: Excavations around the Sphinx, 1856;
Museo de Arte, Ponce, PR ? Léhon from Mont Parnasse, Brittany, 1853