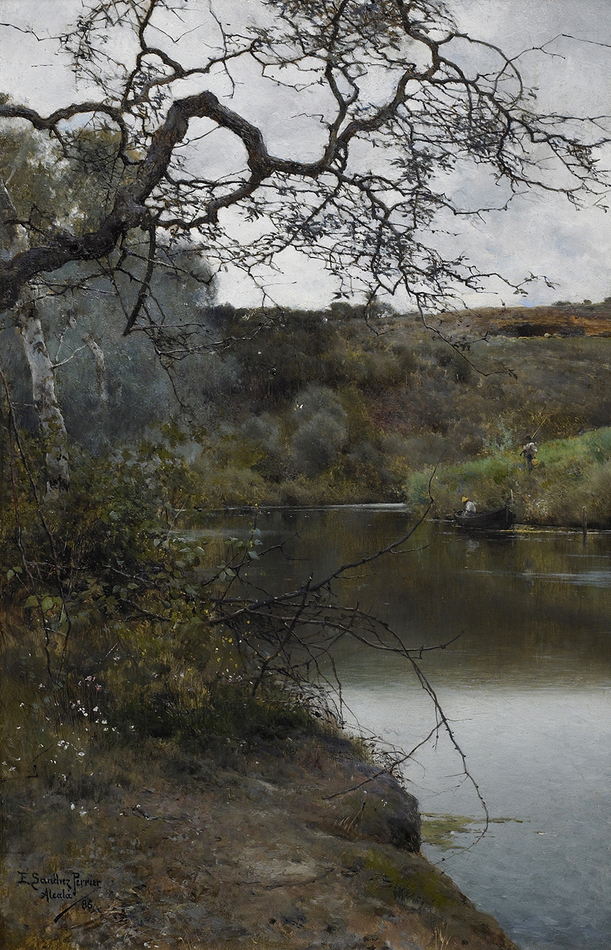 Boating Along a Quiet River, Alcala

During his early years Emilio Sánchez-Perrier helped make clocks at his father’s shop in Calle Sierpe in Seville. He soon showed a natural gift for drawing and painting, and at the age of thirteen he attended the School of Fine Art in Seville, where two of his masters were Joaquín Domínguez Bécquer and Eduardo Cano de la Peña. He later moved to Madrid to study at the San Fernando School, although he often returned to Alcalá de Guadaira where he joined the group of painters around Manuel Wssel de Guimbarda. The young Sanchez Perrier met Martín Rico during one of his trips to Seville, and Rico’s work would deeply influence his artistic approach, guiding him towards landscape painting. In 1871, at the age of sixteen, he travelled to Granada with Rico, and on this trip he also met Mariano Fortuny.

Sanchez Perrier took part in exhibitions in Seville and Cadiz in 1877, 1878 and 1879, winning the first prize at the Regional Exhibition in Cadiz. In 1878 he debuted at the National Exhibition of Fine Arts in Spain with the following paintings: Reja del Pretorio en el jardín de la casa de Pilatos (“The Praetor’s Railing in the Garden of the Casa de Pilatos”), Huerta con gallinas en Alcalá de Guadaíra (“Kitchen Garden with Hens in Alcalá de Guadaíra”), El ocaso (“Sunset”), La ribera del río Guadaíra(“Banks of the Guadaíra River”), Laguna de los patos (“Lagoon with Ducks”) and El Molino de Mesía (“The Mill at Mesía”). In 1879, the year after his debut at the Spanish National Exhibition, he moved to Paris to pursue his studies in the European artistic capital, where he painted in the studios of Jean-Léon Gérôme and of Félix Ziem. At this time, Sanchez-Perrier also met the Spanish painter Luis Jimenez y Aranda, who had moved permanently to France. Even after Sanchez-Perrier returned to Spain, he made regular visits to France and to Jimenez Aranda.

He made his debut at the Paris Salon of 1880 with three works, Seville’s Alcazar Garden, Winter, and Andalusia. He exhibited regularly at the Salon from this time, and won an honorable mention at the Salon of 1886, medaled at the Exposition Universelle in Paris in 1889. He also was awarded a second prize at the National Exhibition in Madrin in 1890 for a painting entitled February (Museo Nacional del Prado, Madrid).

Sanchez Perrier met with great success in Europe and in America. His many images of Alcalá de Guadaira and his riverside landscapes of the region caused him to be hailed as the founder of the “School of Alcalá de Guadaira.” In 1888, critic Armand Gouzien wrote in La Illustración Española y Americana: “He is the most harmonious landscape artist we know…. He has an originality entirely his own.” Sánchez-Perrier was made a member of the Société General des Beaux Arts in France in 1894 and a member of the Seville Academy of Fine Arts in 1903.