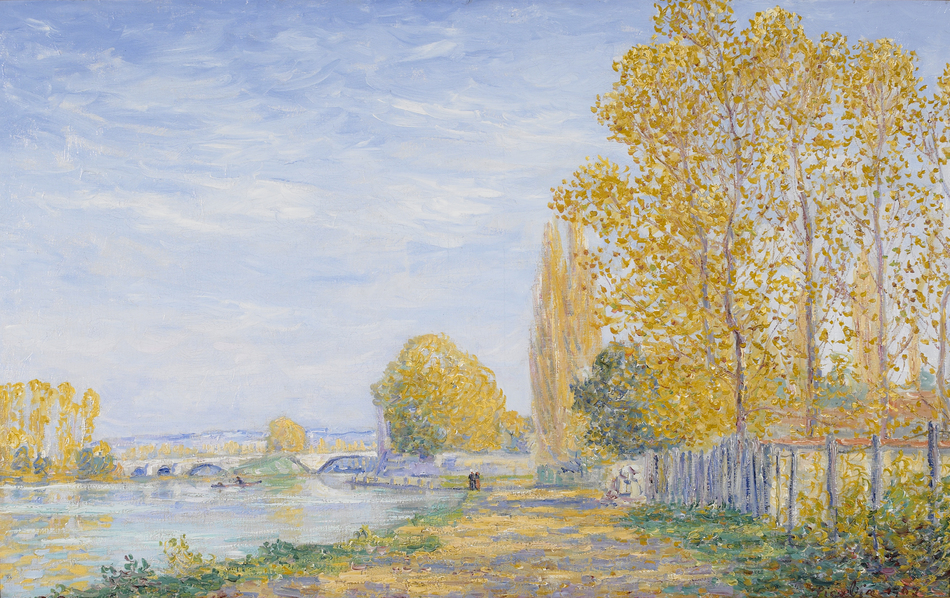 While Francis Picabia is commonly associated with Dadaism and the Puteaux Group, his first great successes came from works completed in an Impressionist manner. Beginning in 1902-1903, the young Picabia painted Impressionist landscapes at Moret-sur-Loing, a site that had been an inspiration for Monet, Renoir and Sisley, as well as at the Martigues. Highly influenced by these artists, and Sisley in particular, Picabia completed series of works depicting the same site under different conditions of weather, seasons and at different times of the day. He mastered an Impressionist technique and exhibited his works regularly at the Salon des Artistes Français (the famous annual Paris Salon), as well as the progressive Salon des Indépendants (which was founded in 1884 by a group that included Cezanne, Gauguin, and Pissarro) and the Salon d’Automne. Great success came in 1904, when Picabia landed a one-man exhibition at the prestigious Galerie Haussmann. The exhibition opened in February 1905 with 61 works and accompanied by a catalogue and biography of the artist written by the prominent writer, Léon Roger-Milès. Roger-Milès commended Picabia for understanding the long effort it took Sisley and Pissarro to conquer light, and for his courage to resist temptations that led other adherents of Impressionism to offer mere exercises in virtuosity. (1) He wrote, “We wander through his landscapes…. He renders them with a joy in color that delights you… what he’s really trying to do, is to express…the music inherent in the things he hears in his soul.” The critical response to the exhibition was overwhelmingly positive, and largely echoed Roger-Milès sentiment that Picabia’s Impressionist work was personal and unique, far from being derivative of the work of the Impressionist masters. Art critic Louis Vauxcelles acknowledged that “there may be suggestions in him of similarities with Pissarro, and especially with Sisley,… but while so many dishonest followers plagiarize Monet, Sisley, and Pissarro, and steal their effects, M. Picabia, who already possesses a very individual technique, expresses, year after year, a temperament that is his own, and his alone.” (2) Sales from the exhibition included the first of Picabia’s paintings to be acquired by the State.

Over the next two years, Picabia continued to refine his Impressionist work, travelling to paint at Ouistreham, Passy-les-Tours, Nemours, Montigny, and the Martigues, as well as continuing to paint at Moret and Villneuve-sur-Yonne. He continued to send large, salon-style Impressionist paintings to the Salon of the Artistes-Français, as well as sending works to exhibitions in Nancy, Bayonne-Biarritz and to another solo show in Berlin in 1906. Galerie Haussmann held another one-man exhibition in 1907, again with a catalogue and text by Roger-Milès who described Picabia as a “virtuoso, seated at his keyboard, plucking scales.” Picabia’s admiration of Sisley is evident in the work of this time (and indeed the artist even helped to raise financial support for a monument to Sisley at Moret). Yet while comparisons to the work of Sisley continued, Picabia confirmed the personal character of his work when he commented that “craft in any fashion must not be the quest of the painter; he must reproduce the emotion which nature made him feel without the least care for technique.” (3) Following this second successful exhibition at Galerie Haussmann, Picabia participated in group exhibitions in Barcelona and Munich and had a solo show at the Cremetti Gallery in London that elicited another critical comparison to the original Impressionists.
Picabia continued his Impressionist mode until late in 1908. In a short few months, he shifted his focus to a form of Neo-Impressionism based on the work of Signac, abandoning his Impressionist style. In March of 1909, Picabia’s dealer Danthon cleared his gallery of Picabia’s Impressionist work, auctioning ninety-nine paintings, drawings and prints at the Hôtel Drouot. From this time, elements of Fauvism and Neo-Impressionism as well as Cubism and other forms of abstraction appeared in his painting, and by 1912 he had evolved a personal amalgam of Cubism and Fauvism. Picabia worked in an abstract mode from this period until the early 1920s.
Picabia became a friend of Guillaume Apollinaire and Marcel Duchamp and associated with the Puteaux group in 1911 and 1912. The Puteaux group was an offshoot of Cubism who held an interest in Euclidean theories on proportion and advocated a mélange of modern tendencies, in particular combining cubism with the color of fauvism and the lyrical subjects of post-impressionism. Picabia participated in the 1913 Armory Show, visiting New York on this occasion and frequenting avant-garde circles. Alfred Stieglitz gave him a solo exhibition at his gallery “291” that same year. In 1915, which marked the beginning of Picabia’s machinist or mechanomorphic period, he and Duchamp, among others, instigated and participated in Dada manifestations in New York. Picabia lived in Barcelona in 1916 and 1917. In 1917, he published his first volume of poetry and the first issues of 391, his magazine modeled after Stieglitz’s periodical 291. For the next few years, Picabia remained involved with the Dadaists in Zurich and Paris, creating scandals at the Salon d’Automne, but finally denounced Dada in 1921 for no longer being “new.” The following year, he moved to Tremblay-sur-Mauldre outside Paris, and returned to figurative art. In 1924, he attacked André Breton and the Surrealists in 391.
Picabia moved to Mougins in 1925. During the 1930s, he became a close friend of Gertrude Stein. By the end of World War II, Picabia returned to Paris. He resumed painting in an abstract style and writing poetry. In March 1949, a retrospective of his work was held at the Galerie René Drouin in Paris. Picabia died November 30, 1953, in Paris.