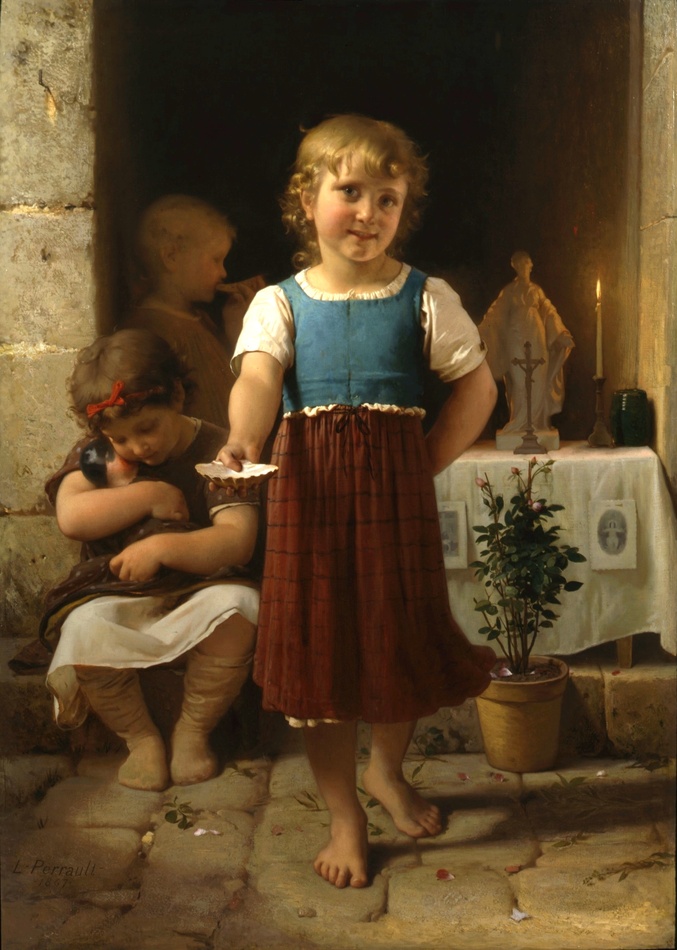 Give me for my Chapel

…it is not extravagant to add that no painter of children, from the time of Albano to the present day, has more perfectly rendered the inner structure and subtle modeling of surface, the peculiar quality and graceful action of a child, in perfect physical beauty and health; and all artists know that children are the most difficult of subjects. 1

…a polished French gentleman…suave and affable in his manner, tall and vigorous, a serious worker. An extraordinarily rapid talker, his words seem to tumble over each other in their frantic haste to get out…his studio is richly and picturesquely furnished, after the usual luxurious manner of successful Parisian artists. It is, however, no place of leisure, for Perrault is one of those modern painters who do their ten hours a day of hard work. He was the air of a well-to-do, practical man of the world. 2

Perrault’s public career began during the period of the Second Empire, a time heavily influenced by the trauma of the 1848 social and political uprising that saw the July Monarchy and its despotic leader Louis-Philippe driven from power. In consequence, the buying public sought freedom in works that displayed a light-hearted sense of beauty, offering them some respite from the tumultuous past. Perrault’s images satisfied this public craving for delicate compositions, and not only focused on mythological scenes, but also children, nudes, genre scenes, and even military scenes.

He made his debut at the Salon of 1861 with Le Vieillard et les Trois Jeunes Hommes (The Old Man and the Three Young Men). In 1864 he was given his first recompense for his work, an honorable mention for La Frayeur (The Fright). He also earned a second-class medal in 1876 for St. Jean le Précurseur (Saint John the Precursor) and L’Oracle des Champs; -idylle (The Oracles of the Fields-Idyll).

An important element of Perrault’s work was his vision of children, which lead him to portray them with an angelic touch of softness. Whether Perrault’s young models were depicted playing a game, positioned against a background of flowers, or placed within a mythological story and setting, they all exude qualities of innocence and childish beauty. Philip Hook further explains images of childhood and their corresponding layers of meaning when he wrote, “During the nineteenth century, popular attitudes to children crystallized into various stereotypes: innocence; the microcosm of adulthood; vulnerability; endearing naughtiness.” 3 In addition, Perrault’s focus on children, who he saw as innocent and charming, appealed to new and modern attitudes toward childhood that saw children not as miniature adults but as beings with their own characteristics.

Perrault continued to exhibit at the Salons until the end of his career. In 1887 he was named Chevalier de la Legion d’Honneur. At the Expositions Universelles of 1889 and 1900, he received a bronze and silver medal, respectively. He also exhibited in Vienna, London, Boston, and Philadelphia and won numerous medals in these exhibitions, and was later appointed, in 1873, to represent France as "Diplômât d'honneur" to Vienna, Philadelphia and London. He also became a member of the Société des Artistes Français and “hors concours” at the Salon, allowing him to exhibit freely without the necessity of submitting work for jury acceptance. He died in 1908 in Royan. Upon his death, the town of Poitiers erected a commemorative monument in honor of his achievements.