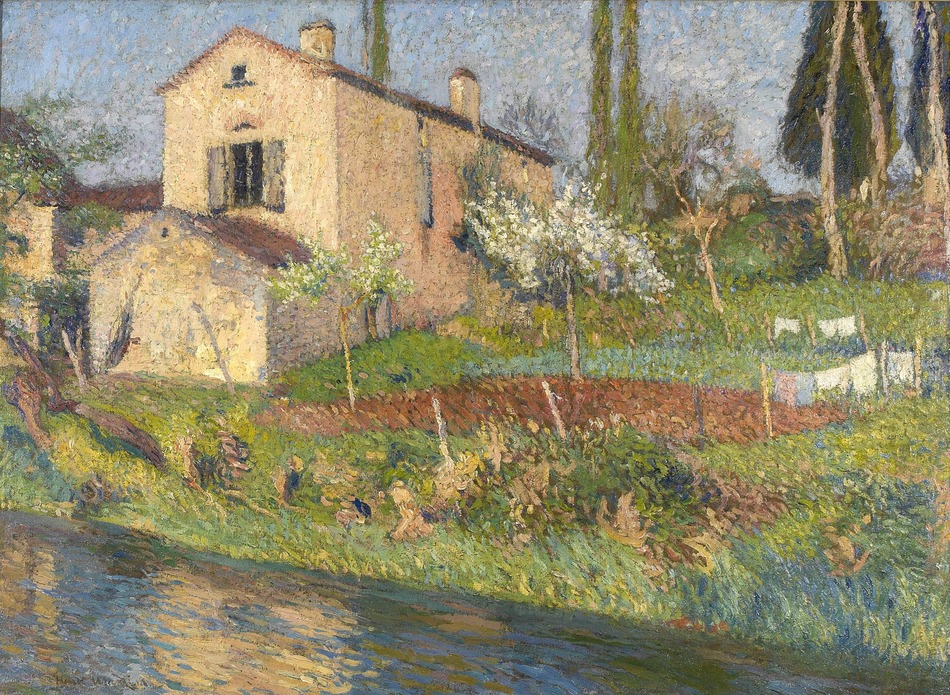 This work is accompanied by a certificate of authenticity from Cyrille Martin.

In 1900 Henri Martin purchased the home known as Marquayrol overlooking the Village of La Bastide du Vert not far from his native Toulouse. Henri Martin would produce many of his most memorable paintings in these environs during the remainder of his life. The ancient arched bridges, charming stone buildings and stands of poplar trees along banks of the river would become to Henri Martin what Giverny was to Claude Monet: an unending source of inspiration, wonder and beauty. With its fresh color and pointillist technique, the current work is an exceptional example from Martin’s productive seasons spent at Marquayrol.

The view depicts the house in La Bastide du Vert that the artist gave to his loyal servant Marie-Louise at the end of his life. Martin uses brushwork of varying direction, length and weight to express the varying visual qualities of the scene: from the long, wet strokes of the stream, to the thick, impastic dabs of the almond blossoms and quick, broken dashes of the hazy sky. The effect is a shimmering, textural surface that captures the constantly shifting and sparkling quality of bright, southern light. Another view of the same house and of similar scale was included in an exhibition of Martin’s work at the Musée Henri Martin, Cahors, France in 1993 (cat. no. 91). This view of the home also includes, at the upper right, a corner of the cemetery where Martin is buried.