Laugé?s time in Paris spanned the critical years from 1886 to1888 (Seurat's La Grande Jatte was first exhibited amidst much controversy in 1886) and his contact with Neo-Impressionism should not be underestimated. In 1894 he exhibited at the Salon des Indépendants, as well as at a Toulouse exhibition with de Bonnard, Maurice Denis, Sérusier, Roussel, Toulouse-Lautrec and Vuillard. In addition, he held several one-man shows in Paris from 1907-1930.

It was after his departure from Paris that Laugé developed his divisionist technique, following the lead of Seurat and the Pointillists. The technique consists in juxtaposing small strokes of primary color on the canvas in such a way that the ?optical mix,? traditionally created by mixing colors on the palette, is achieved instead by the operation of the viewer?s eye at a certain distance from the painting. Although Laugé never adopted Seurat?s scientific attitude, his interest in the primacy and division of color resulted in work with a vivid, translucent palette. From 1888 until about 1896, Laugé composed his pictures with small points of color. At the end of the century he abandoned the dots and dabs and painted his landscapes, portraits, and still lifes with thin, systematically placed strokes resembling crosshatching. After 1905 he applied his pigments more freely, with enlarged strokes and thick impasto that brought him closer to a traditional impressionist technique whilst maintaining his ability to paint the translucence of southern light. 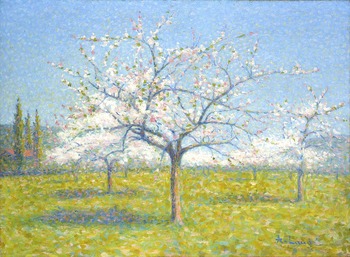 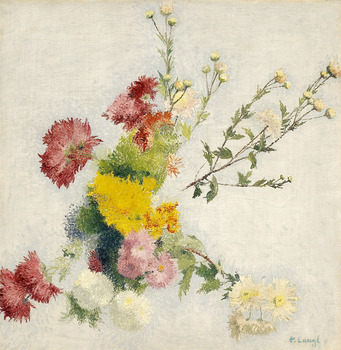