Charles Jacque was among the first generation of painters to leave the city for Barbizon and the forest of Fontainebleau, where helped to establish the Barbizon School. Also a founding and influential member of the ?Men of 1830? (also called l?Ecole francaise du paysage), a loose movement of artists who, spurred on by the Revolution of 1830, sought out new directions in landscape painting. His strong, realistic, yet sensitive depictions of shepherds and their flocks form one of the most cohesive and important bodies of work produced by the movement.

Born in 1813 in Paris, Jacque began his training in etching rather than painting, as an apprentice to a map engraver. In this area, Jacque was unsurpassed among his colleagues in the Barbizon school. After military service, he went to England, where he worked as an engraver for La Charivari. Returning to France after two years abroad, he made his Salon debut in 1833 and regularly contributed paintings every year until 1870. Winning medals for both etching and painting, he was awarded the Legion d?honneur in 1867.

During the 1840s, he and his friend, Jean-Francois Millet moved to the village of Barbizon where they felt they could more realistically portray nature. Jacque bought a house there and, influenced by Diaz?s technique and Millet?s themes, found his inspiration in hen-houses, pigsties and flocks of sheep at pasture. He was also involved in non-artistic activities, such as land speculation and poultry breeding, about which he wrote a book, Le Poulailler, monographie des poules indigènes et exotiques, published in 1848. He left Barbizon in 1854 and continued to paint in the outskirts of Paris until he died on May 7, 1894. 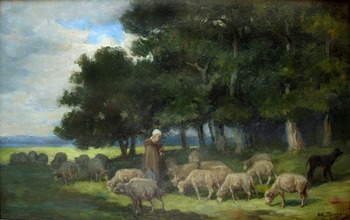 Charles Jacque
Shepherdess and Sheep at the Edge of the Forest 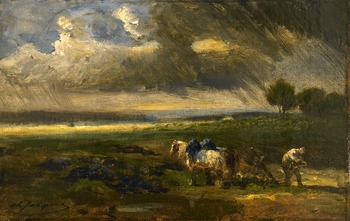 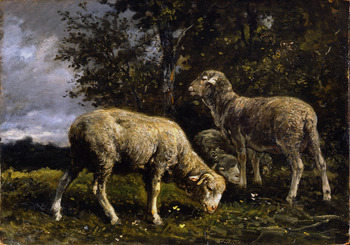 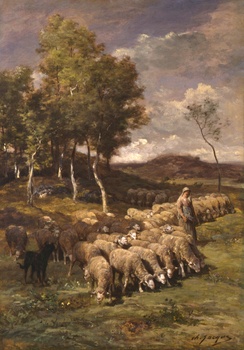 Charles Jacque
Shepherdess with Her Flock and Dog
SOLD 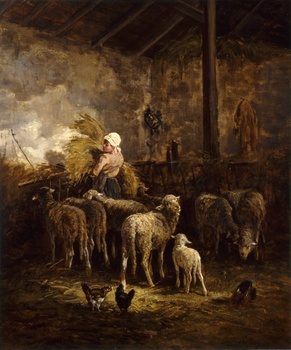 Charles Jacque
Sheep and Shepherdess in a Sheepfold
SOLD 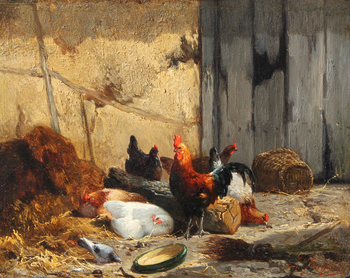 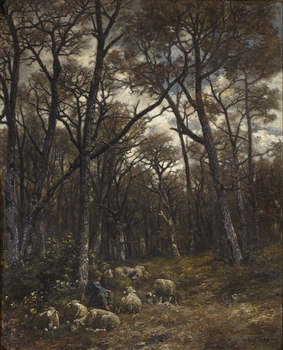 Charles Jacque
Shepherd and flock in a moonlit forest
SOLD