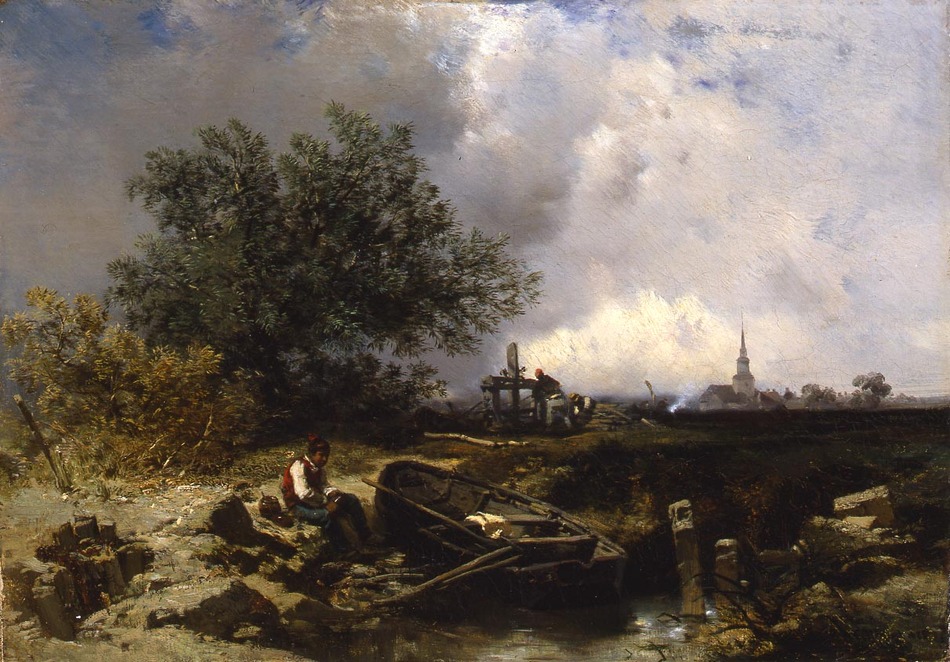 In The Fisherman’s Lunch, Hoguet depicts an open, flat landscape where a young fisherman has moored his rowboat along the edge of a shallow lake. Seated on the smooth shoreline, he finishes a simple lunch of bread and stew. The vivid red vest and cap of his rustic costume anchor him at the center of the composition and make him the focus of the broad scene. In the distance, two more figures are hard at work, and further still a third stands over the smoke of a small bonfire. The steeple of provincial church dominates the landscape at the rear of the composition and, although the canvas was completed during Hoguet’s German period, establishes the French character of the view. The picture is typical of Hoguet’s oeuvre, painted with a cloudy turbulent sky and completed in the cool, monochromatic palette for which the artist is known.

Charles Hoguet was born in Berlin to French parents. He began his studies with the marine painter Wilhelm Krause in Berlin. In 1839 the artist moved to Paris where he continued his studies with the landscape painter Bertin, who had also been the master of Corot, as well as with the Barbizon painter Eugène Cicéri, and finally with Louis-Gabriel-Eugène Isabey, a landscapist and one of the leading proponents of Romantic school. After his sojourn in Paris, he traveled extensively, briefly stopping to sketch in England, Holland, and along the Belgian and Norman coasts. He returned permanently to Berlin in 1848.

Hoguet was known primarily as a painter of landscape and genre scenes. Having absorbed the spirit of the Romantic school from his teacher Isabey, Hoguet often depicted broad landscape views with menacing skies. Despite this tendency towards dramatic views, Hoguet was also of the same generation as Charles Daubigny and embraced the principles of the Barbizon school. The result was a penchant for stormy landscapes painted in a brushy, realistic style. This unique blend of influences gained him the title the ?Raphael of windmills.? Even after the 1850s, while Courbet lead French landscape painting towards greater Realism, Hoguet continued to work in a more Romantic vein, giving his work greater affinities with that of Diaz, Corot, and the first generation of Barbizon painters than to that of his more Realist contemporaries. He exhibited his landscape scenes at the Paris Salon from 1842 to 1853, medalling at the Salon of 1848, a year notable for the dominance of the Barbizon School. After 1848 he continued exhibiting in Berlin, where he medalled in 1859, and gained membership to the Berlin Academy in 1869.