Jean-Louis Hamon was a painter of idyllic and atmospheric genre views, quite often of mothers and children, as well as of allegorical and classical scenes. One of the originators of the Neo-grec approach to painting that was popularized in the years around 1850, Hamon was one of the few painters who maintained the movement?s integration of genre subjects and classicizing style throughout his career.

He was born at St.-Loup-de-Plouha in Northern France on May 5, 1821, the son of a customs agent. After a certain amount of struggle, Hamon?s father eventually relinquished and let his son pursue his artistic talents. Hamon received a scholarship to study painting. He was critiqued by Ingres and entered the Ecole des Beaux-Arts in March of 1842. Once there, he became the student of the master history painters Paul Delaroche and Charles Gleyre. Both had a strong influence on their student and he never abandoned their cool, elegant sensitivity: indeed, the soft contours and smooth finish of Hamon?s mature paintings recall Gleyre?s neo-grec style. Indeed, Hamon participated in the development of the Neo-Grec aesthetic in the early 1850s, and as early as 1850 collaborated on a work depicting the four seasons along with Henry Picou, Jean-Léon Gérôme and Gustave Boulanger: Hamon painted an allegory of winter in the work (Cleveland Museum of Art, 1980.263). From 1848 to 1853, he was employed as a draughtsman at the Sevres factory. Hamon made his Salon debut in 1847. He was awarded a third place medal in 1853, a second place in 1855, and a silver medal in the 1867 Exposition Universelle. His composition Ma Soeur n?est pas là, was popularized through engraving; this image helped make his reputation and launched his promising career. In 1855 he was made Chevalier of the Legion of Honor. Hamon is considered one of the finest genre painters of his era. His works are found in the Louvre and in the museums of Lille and Marseille, as well as others. 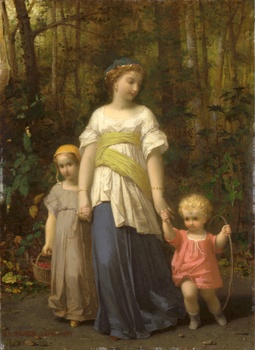 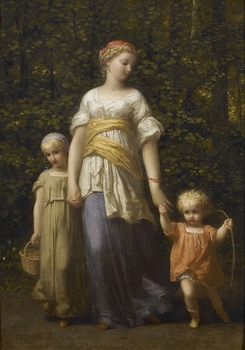