Art history has occasionally lost sight of the importance of Jean-Baptiste-Armand Guillaumin?s work to the development of modern art and only recently has his work been acknowledged to the degree it deserves. Guillaumin was a founding member of the now famous group of independent young French painters who organized the first Impressionist exhibit in 1874. His revolutionary comrades included Claude Monet, Camille Pissarro, Auguste Renoir, Alfred Sisley, Edgar Degas, Paul Cezanne and Berthe Morisot. Guillaumin?s work appeared at six of the eight Impressionist exhibitions between 1874-1886. He lived the longest of all the founders of Impressionism, dying just after Claude Monet in 1927.

Guillaumin began humbly, working as a clerk at the Orleans railroad company, painting images of Montmartre and the quays of the Seine during the weekends. He studied painting at a local art school and later progressed to the Academie Suisse in 1861 where he met Cezanne and Pissarro. Soon after he exhibited at the Salon des Refusés in 1863. He painted in Pontoise in the 1870s with Pissarro and accompanied by Cezanne, would often go to see art patron Dr. Gachet, who gave them help and encouragement. Guillaumin?s careful study of light and color at the different times of the day was fundamental to the burgeoning Impressionist theory. The artist chose to paint outside the city, en plein-air, focusing on the ever-changing atmospheric effects in nature. Guillaumin observed the multitude of ways light touched the surface of the streets, skies, water, trees and people and was able to capture it on canvas with great subtlety and sensitive perception. Guillaumin had a passion for sunlight and was even seized and characterized by a sort of ?violettomania? indicated by the number of his works tinted with a lilac hue. Guillaumin?s later works were marked by a passion for color that showed an alliance to the Fauves. The expressive and dynamic application of paint and the subtle use of impasto, reveals some of the inspiration Van Gogh had provided 12 years prior. 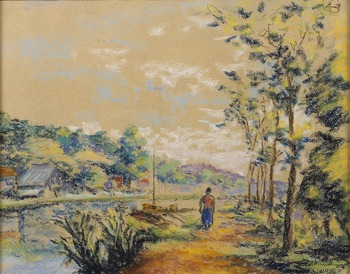 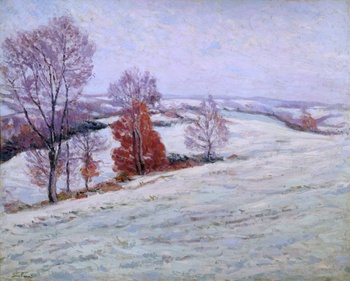 Armand Guillaumin
A View of a Bay at Agay
SOLD