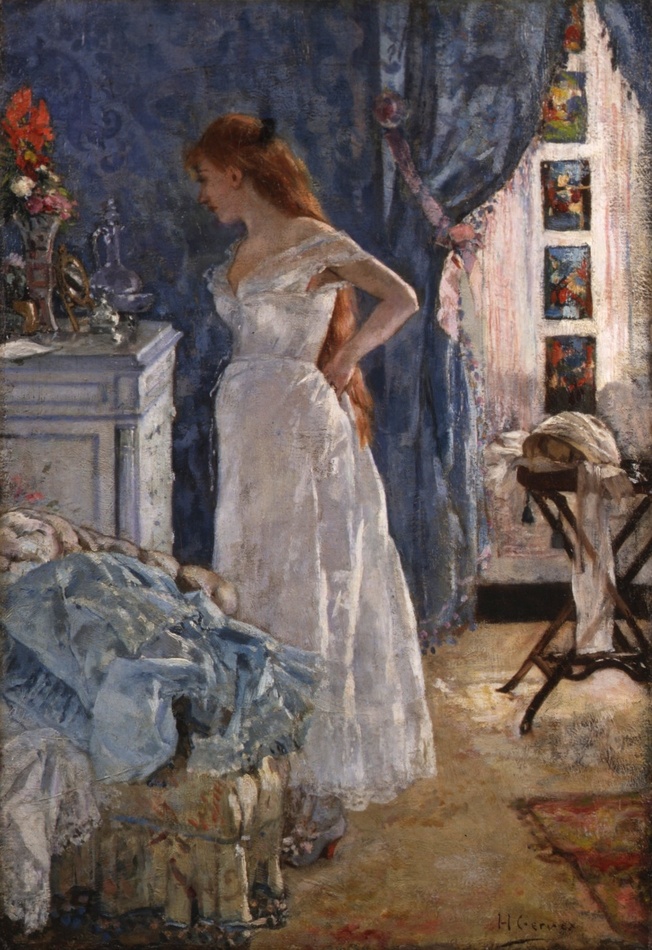 As a painter intimately aware of the works of Edouard Manet and Edgar Degas, Henri Gervex was also committed to the traditions of realism and the Academy in the creation of his own imagery during the late 1870s and 1880s. His most controversial painting, Rolla (1878) created scandal when first shown at the Salon; its theme led to the work being severely criticized for moral impropriety and to its being removed from public display when it was shown at the Salon. However, Gervex at this moment of his career was undaunted in his pursuit of new thematic possibilities as he was very much aware of innovations in both literature and the visual arts. Emile Zola’s intense naturalism, his examination of the urban environment and refusal to shy away from difficult themes emboldened visual artists to follow the same path in their own works -- Gervex among them.

Zola’s Nana was one of the most widely read naturalist novels from the moment of its appearance in book form. Here, Zola chronicled the rise, adulation and eventual fall and decay of a contemporary sex goddess. The press response to his novel was overwhelming; cartoons continually appeared in the daily Parisian press extolling Zola for having touched upon a societal nerve. The response to Nana was immediate and profound. Edouard Manet created his version of Nana (in 1877) before the extensive text of the novel was published, demonstrating that the literary character, who had been introduced in earlier Zola novels, was already an icon among the public inaugurating and aura of anticipation. By 1880, in a painting that has not been located, Gervex created his first version of Nana. The beautiful young woman is dressing before a large mirror in the company of an elderly maid and a young gentleman. The latter eyes her admiringly, while twirling his moustache in an attitude of ownership. Since Gervex was much taken with the theme of sexuality, and with the significance of Nana as both an emblem and as a figure both used and abused in spite of her beauty, he clearly wanted to create other versions of the same sex goddess. La Toilette follows in this tradition.1

In this painting, Gervex focuses on the actions of the young courtesan as she is looking at her reflection in a small mirror on a chest of drawers. Her dress cast aside at the left, her hat thrown on a small table in the rear create an ambiance of disarray; the atmosphere speaks of a sexual encounter -- a moment made more intense by the pensive look of the young woman. What connects the scene to Zola’s novel, and to Nana in particular, is the fact that this interior suggests a fashionable decor where plush draperies and rich carpeting reveal the type of environment in which Nana must have lived. At the right, a small series of stained glass panels, hanging in front of a large French window from which the light that illuminates the scene enters the room, further heightens the richness of the setting and reveals the current taste for stained glass in interiors. The use of these details suggests contemporaneity. The work is painted with a very broadly brushed surface and with an understanding of the color tonalities of Impressionism. In this canvas, Gervex demonstrates that he has understood the innovations of the Impressionist painters. The work is also treated with the same lively brushed style and tonality as Gervex's Rolla, which would date it in the late 1870s or very early 1880s.

In 1905, when a large exhibition of works by Gervex was held in Paris at the Galerie Georges Petit, La Toilette was on display. While a description of the painting was not provided in the catalogue, the work at the time was in the collection of a private individual (Monsieur Hauch), attesting to the fact that Gervex was finding support in the marketplace for his imagery. The existence of this canvas, completed at a time when Gervex was influenced by Manet as well as the Impressionists, reveals the fact that he had the skill to combine the best qualities of literature and the visual arts to create an image that speaks to the moment and the ability of an artist in finding contemporary themes.

We are grateful to Professor Gabriel P. Weisberg for his assistance in cataloguing this picture.