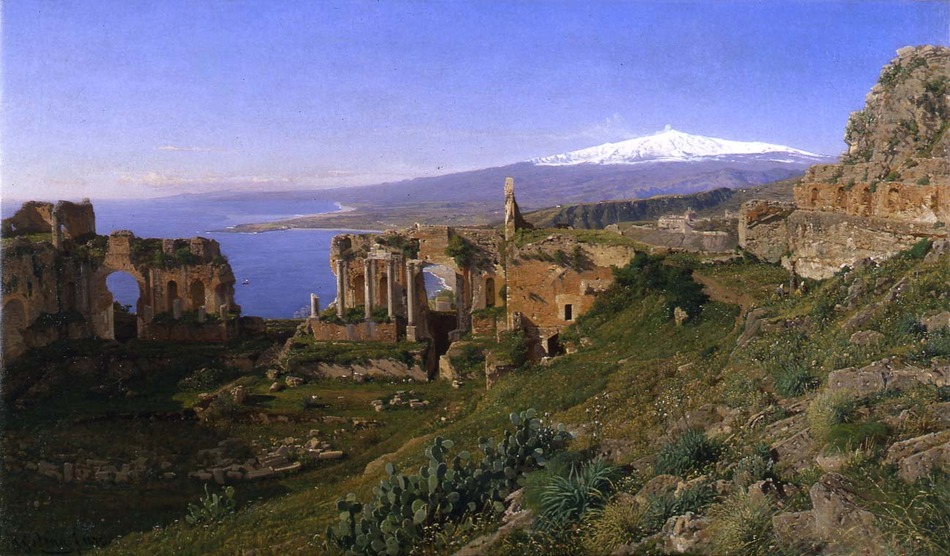 The Amphitheater at Taormina, Sicily

In the present composition, Geleng depicts the site’s Greek amphitheater, erected in the second century BC and expanded by the Romans. The crumbling walls and columns stand on a high plateau above the Bay of Naxos and Calabrian Coast. In the distance stands Mount Etna, with a thin stream of steam blowing from its snow-capped peak over the blue water.

Otto Geleng was known in his hometown of Berlin for his fine paintings, which he composed and painted in Italy but exhibited in Germany. The long tradition of artists training in Italy is still relevant today as it was in Geleng's time. What distinguishes Geleng, however, is his choice to depict the more southern regions where he captured the spectacular views and light of Sicily. He often painted the area's Greek colonial ruins, including Taormina, situated on the Mediterranean.

Taormina's first important tourist was Johann Wolfgang Goethe who dedicated exalting pages to the city in his book entitled "Journey to Italy," but perhaps it was Geleng?s views that made its beauty talked about throughout Europe and turned the site into a famous tourist center. The artist arrived in Sicily at the age of 20 in search of new subjects for his paintings. On his way through Taormina he was so enamoured by the landscape that he decided to stop for part of the winter. Geleng began to paint everything that Taormina offered: ruins, sea, mountains, none of which were familiar to the rest of Europe. When his paintings were later exhibited in Berlin and Paris, many critics accused Geleng of having an ?unbridled imagination?. At that, Geleng challenged them all to go to Taormina with him, promising that he would pay everyone's expenses if he were not telling the truth. He returned to Taormina and created the first hotel from a noble mansion, now called the Timeo Hotel, thus opening the area to its first waves of tourism. Geleng married and spent the remainder of his life in Sicily.