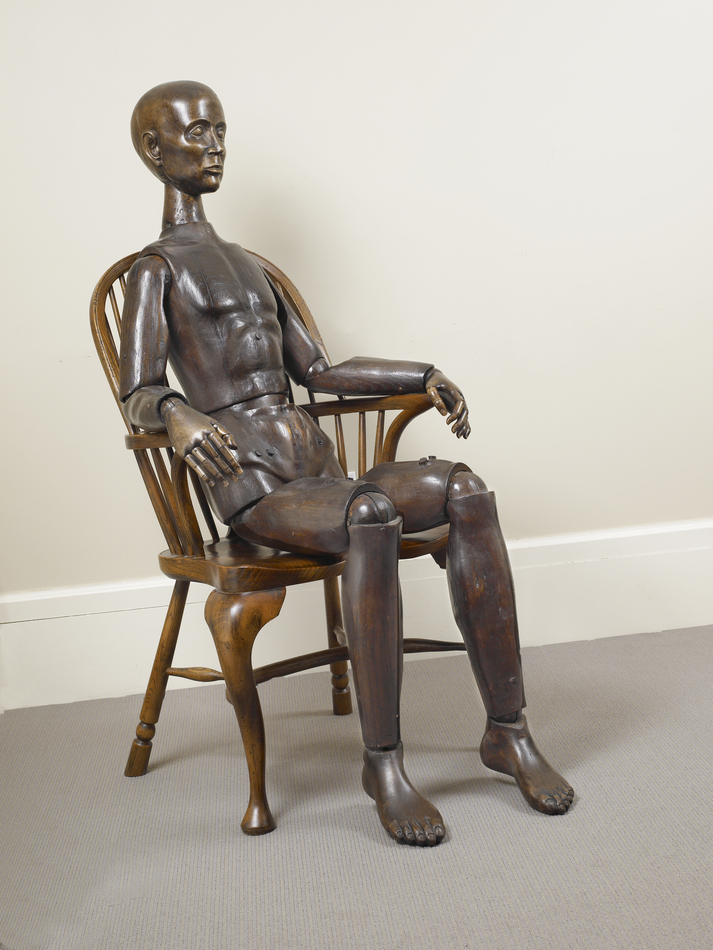 The Mannequin, or lay figure, was a ubiquitous presence in the artist’s studios from at least the Renaissance, but its use was rarely explicitly acknowledged in paintings, drawings or sculpture until the nineteenth century. Indeed, it comes as a surprise to realize that many of the greatest artists used models of this kind—from Michaelangelo and Titian to Poussin, Gainsborough, Degas, Courbet, the Pre-Raphaelites and Cézanne. For the sculptor, themannequin was as much a workship tool as the mallet, chisel and stool and was at the same time the ‘flipside’ of the living model; inert, more docile, and much more obliging. (1)

These obliging and indefatigable models were used to study the figure, with its skeleton and musculature abstracted into geometric forms, and, perhaps more commonly, to recreate the drape of clothing or fabric and the resulting fall of light and shadow over the human form. With it’s fully articulated limbs and ability to hold poses that would tire a model, the mannequin allowed artists to “rehearse” a range of pictorial effects, particularly an arrangement of drapery or clothing. In fact, the verb “manniquer” first appears in eighteenth century France and is used to describe the act of artfully draping cloth over a mannequin to a natural effect.(2) By the end of the eighteenth-century, demand from artists for accurately proportioned and fully articulating figures was so great that mannequin–makers went to ingenious and extraordinary lengths in order to engineer objects that are works of art in themselves.

These mannequins range in size from six inches to more than life-size, and served a variety of purposes. Early surviving sixteenth and seventeenth century wooden articulated figures were intricately carved to a high degree of finish and made to reflect the “perfect human form”. As a tool in the artist’s arsenal mannequins were hidden from view and rarely, if ever, included in representations of the artist’s studio. In the present model, hardwood has been beautifully planed and defines the musculature of the body, especially evident in the torso with its rib cage, clavicles and stomach muscles clearly rendered.