Hippolyte-Camille Delpy was born in Joigny in 1842 and died in Paris on June 4, 1910. He was a student of Charles François Daubigny. It was Daubigny, a friend of the Delpy family, who took the young Camille along with him on his strolls. Inspired by Daubigny and his creations, Camille?s only childhood aspiration was to become a painter. In Paris, Daubigny introduced his young pupil to Corot. It was a moment of intense emotion when Corot admitted the young Delpy into his studio.

In 1869, he began to exhibit at the Salon. He traveled extensively throughout the provinces, especially visiting Corot in Ville d?Avray and Daubigny in Auvers-sur-Oise. In 1874 he was married to Louise Berthe Cyboulle. During their marriage, she was a source of incomparable happiness to him. The paintings he did during this period reflect this happiness and many of his works are filled with light and harmony. It was at this time that Delpy met Pisarro and Cezanne at Auvers. The meeting had a great impact on Delpy?s use of color. Although he remained faithful to the technique of Daubigny, Delpy brought a more vigorous touch and a greater intensity of color to his work.

His first gallery exhibition was at the ?Galerie des Artiste Modernes,? in Paris, and it was surprisingly successful. He also exhibited in the ?Exposition International? with De Nittis, Whistler, Monet, Sisley, Pissaro, Renoir, and Morisot. To find Delpy in this company clearly shows the esteem in which he was held.

The Barbizon School held that the notion of color must be added to the classical theory of harmony between tones and values. Under the influence of the Impressionists, Delpy realized the important role of color, which he used to achieve a brighter truth in his paintings. 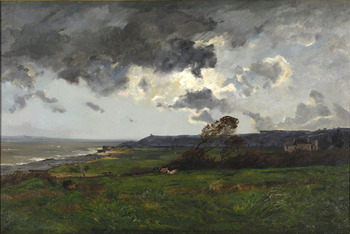 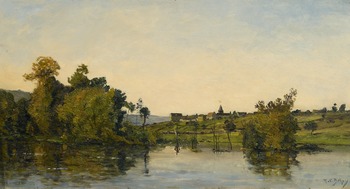 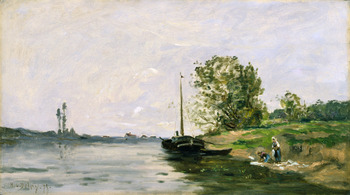 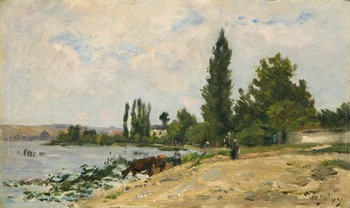