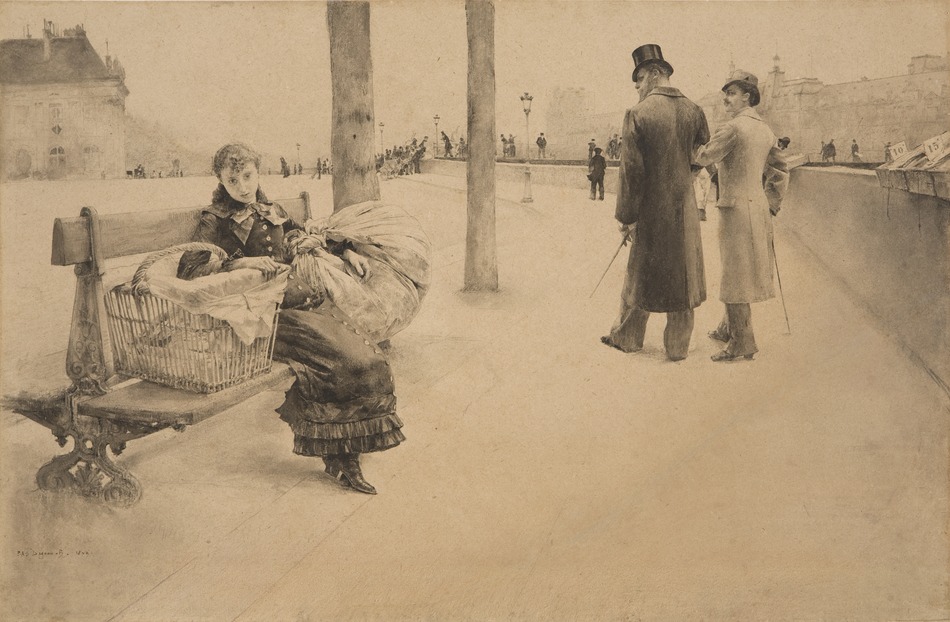 *This work is a preparatory drawing for “Sur la quais de Paris en automne” of 1880.

A quintessential example of Naturalist art of the period, the present work was completed as a highly-finished preparatory drawing to a painting entitled Sur la quais de Paris en automne of 1880. The work depicts a scene on the left bank of the Seine, where the Pont des Arts stretches between the Institut and the Louvre. A young laundress sits on a bench overlooking the Seine, one arm resting on her basket of wares and the other wrapped with a large bundle of laundry. She stares blankly into space, her eyes weary and unfocused. Two well-dressed gentlemen stare back at her with derision, one taking the arm of his companion to lead him away from the girl. Dr. Gabriel Weisberg, in his catalogue “Against the Modern: Dagnan-Bouveret and the Transformation of the Academic Tradition” has identified the two men as two painters who were close companions of Dagnan-Bouveret during this period: Gustave Courtois at left and Karl von Stetten as the shorter figure at right. The inclusion of these two friends as significant figures in the composition prefigures Dagnan’s later tendency to use those close to him as models: his wife, son, and parents often appear in his compositions.

Weisberg also points to the artist’s conscious suppression of social criticism in favor of a more naïve perspective, typical of the Naturalist approach and in contrast to the moralizing or fatalistic tones that dominated the presentation of working-class and peasant types in earlier decades:

In this canvas, Dagnan-Bouveret focused on several themes that are characteristic of this period in his development. The motif of the laundress had been treated by his contemporaries as a symbol of working-class travail, squalor, and prostitution. While Dagnan-Bouveret’s laundress is certainly burdened by her chores, weighed down by two huge bundles of clothes, her respectable dress and demeanor undermine any attempt at social criticism. Since the young woman averts her gaze from the gentlemen strollers at the right, and from the viewer of the painting, she conveys a melancholy detachment that romanticizes her within the urban setting. By contrasting the hardworking laundress with the well-dressed men of evident leisure, the artist gives the impression of seeming to be more interested in social satire than in social criticism. 1

Variations between the current drawing and the 1880 canvas show the development of this very aspect of Dagnan-Bouveret’s Naturalist approach. In the drawing the laundress wears a ruffled black dress with a bow at the collar which seems to belie her poverty, which is made more apparent in the final canvas by her apron and striped smock. In addition, in the final canvas the top-hat worn by Courtois is replaced by a black cap that give him a more bohemian appearance. While the final canvas seems to depict a pair of artists leering at a poor laundress, the drawing shows a theme more reminiscent of Flaubert than Zola: two wealthy gentlemen stare in disgust at a young woman who has fallen in her social position.

It is this type of subtlety and sensitivity to the goals of Naturalism, in addition to the exquisite quality of his oeuvre, that made Dagnan-Bouveret one of the leading painters of the movement.

A contemporary of Jules Bastien-Lepage, Dagnan-Bouveret painted elegant genre and literary themes until 1880, when he exhibited a work entitled The Accident at the annual Salon. The work depicted a young peasant boy being tended to by the country doctor, and signaled the artist?s shift in focus from elegant portraits and genre scenes to the life of peasants and the working class. His approach to these subjects followed the lead of Lepage in its acute perception of psychological expression and its sense of detached observation of the life of the poor. With Bastien-Lepage?s death in 1884, Dagnan-Bouveret became the leading artist of the movement, developing his work to the limits of Naturalistic observation and psychological symbolism.