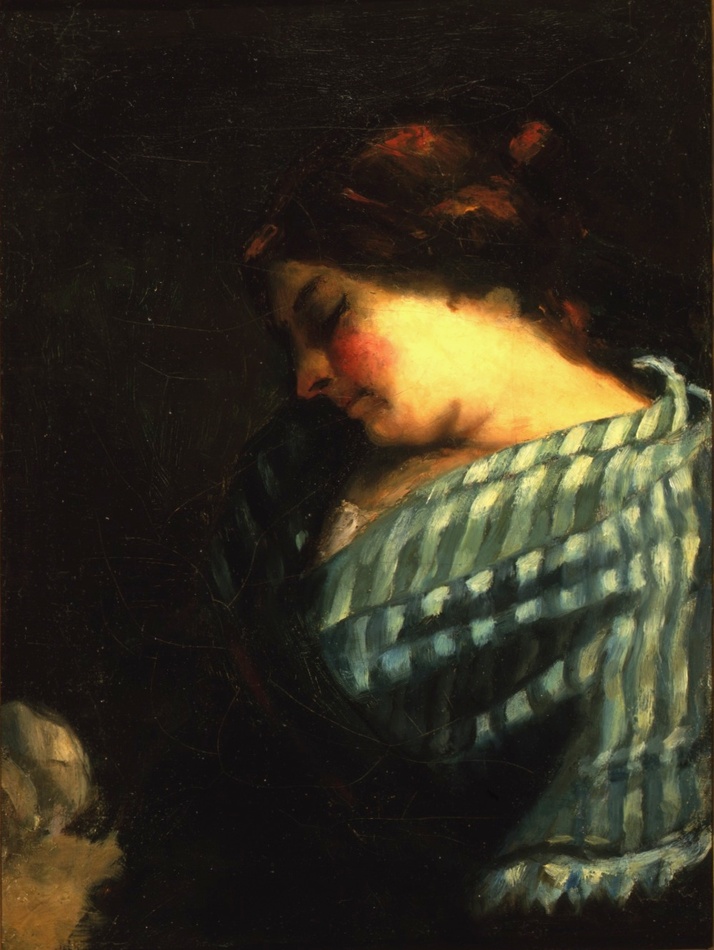 The present work is a preparatory study for Courbet’s painting, La fileuse endormie, dated 1853, now in the collection of the Musée Fabre, Montpellier. Another study, similar to the present work, is in the Musée National de Château de Compiègne.

The present painting was first published in the catalogue of the exhibition titled “La Joie de Piendre, de Corot a Vuillard,” held at Galerie Daber in Paris in 1974. The following year Daber showed it again in an exhibition devoted exclusively to the work of Courbet. In each exhibition catalogue, Daber refers to this study in the context of another which portrays the same subject -- the top half of the shawled figure in Courbet’s well-known painting, La Fileuse endormie, a major work that had been bought out of the Salon of 1853 by Alfred Bruyas of Montpellier and bequeathed by him to the Museé Fabre in Montpellier. The related image, also referred to as an etude, was, at 50 x 60 centimeters, considerably larger than the present picture. It had been in the Polignac collection in Paris in 1949 when Daber included it in the exhibition, “Courbet”, that year and reproduced it in the catalogue.

The present painting appears to have the characteristic feel of a study from the model, with the artist more interested in the set of the head and the hair than in the specific features. He appears particularly interested in the visual challenge of the patterns created by the boldly striped shawl, which is folded several times and which therefore reflects light in different ways. The attack of the brush is strong and the flesh is solid. Although small studies for large paintings are not common in Courbet’s oeuvre, the present composition is a convincing example.

We would like to thank Sarah Faunce for her assistance in cataloguing this picture.