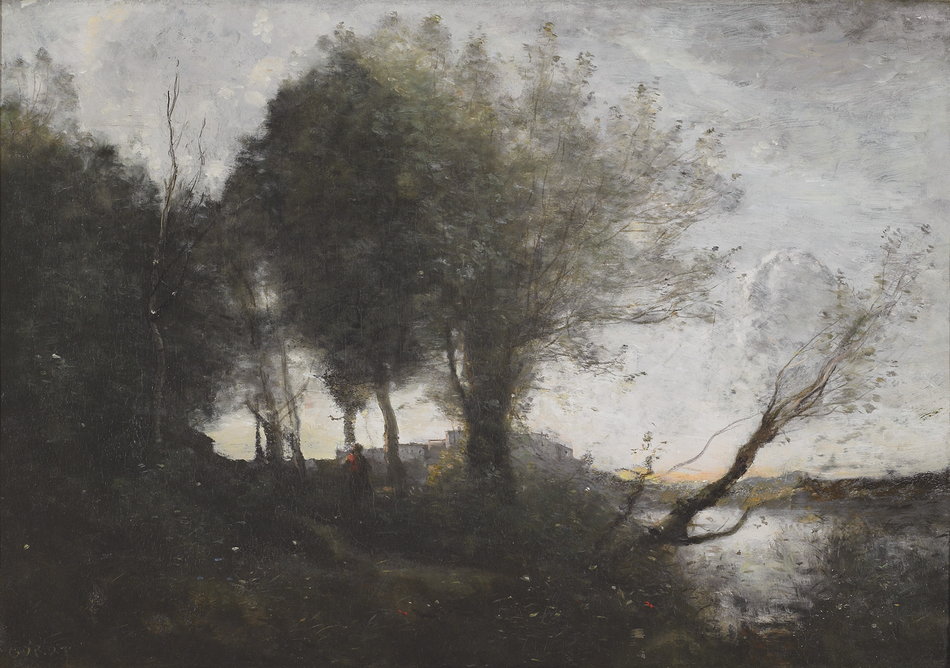 This painting is accompanied by a letter of authenticity from Martin Dieterle and Claire Lebeau (14 March 2007).

The lac du Garde, or Lago di Garda in Italian, is the largest lake in Italy, located between Lombardy and Venice. Renowned for its beauty and mild climate, the lake is bordered by numerous vineyards, as well as high cliffs at its northern tip, where it meets the Alps. Corot first visited the area in 1834, staying at Riva, a picturesque village situated at the northern end of the lake. He submitted a view of the lake to the Salon of 1835, and returned to the subject again in his paintings of the 1860s. It is in these landscapes of the late 1860s that the views of the lac de Garde lose their Italian clarity and take on the misty, silver, poetic quality so prevalent in Corot’s “souvenir” works of this period. In the present composition, the surface of the lake and sky are tones of pale silver, set off by the dark sepia, black and green of trees and grass in the foreground. A whisper of orange sunlight emanates from the horizon, drawing attention to the mountains in the distance and casting an orange glow on a village on a high bank beyond the trees. The exact location of the site is not identified, and the settlement serves to conjure up an idyllic Mediterranean setting, rather than to situate the scene in a particular location. As Josine Smits observes, “the more Corot’s memories of Italy were transformed into a pastoral dream, the more the architectural motifs receded towards a faint horizon, shrinking in importance to become vague symbols of a culture and locality.” 1