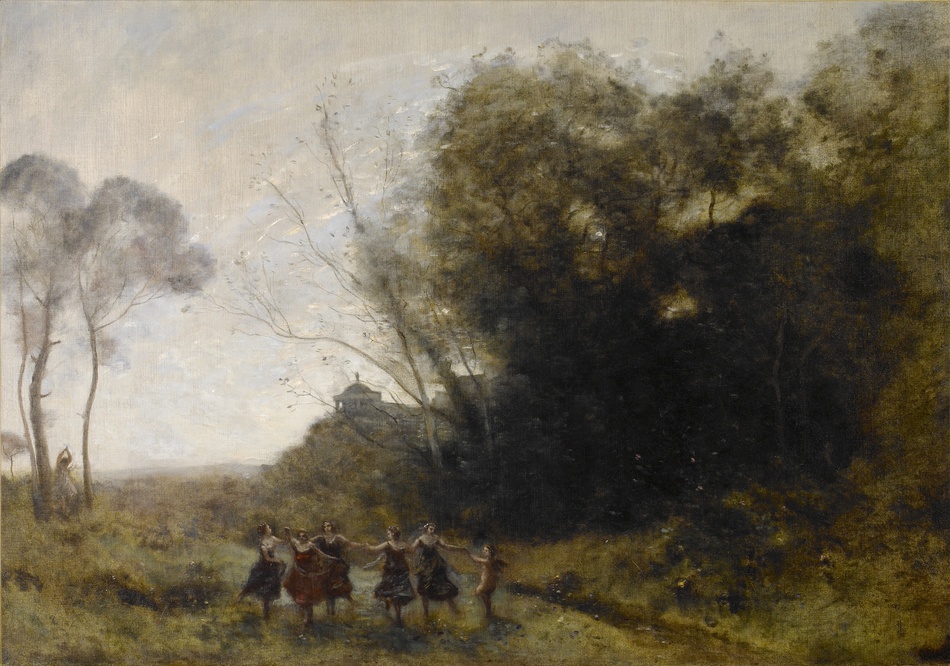 The authenticity of this painting has been confirmed by Claire Lebeau.

Ronde de nymphs depicts a group of five nymphs dancing in swirling pairs, the fifth of whom dances with Cupid, or Love. Their jewel-tones dresses and lively forms stand out from a hazy, evening landscape. A tall mass of dark trees at right anchors the composition, and contrasts with the delicately colored, thinly-glazed Italianate landscape that extends to the horizon on the left. Other figures appear in these contrasting sections of the landscape; silhouetted by light at the left, a nymph runs down a slope with joyful hands clasped in the air to join her sisters while another, quieter figure appears in the shadows of the trees. In the distant center, a domed temple appears through the branches, drawing the eye back into the warm light of the crepuscular sky.

The motif of dancing nymphs was important in Corot’s oeuvre. One of the earliest and best known example is in the Musée du Louvre, the Une matinee, danse des nymphs, which was Corot’s 1850/51 Salon Entry. Upon its unveiling at the Salon, de Chennevières called it, “The most beautiful landscape of 1850” and said, “In truth, this good man, by the breadth and tranquility of his talent, his disregard of sterile methods, his intimate charm and mellow sentiment, is to our other makers of landscape what Poussin is to Allegrain or Claude to Lantara.”1 Corot returned to this motif numerous times, although each new variation was painted without direct reference to earlier versions. Corot once said, “I preserve in my heart and in my eyes the copy of all my works.” 2

It is interesting to compare the two works. The 1850 painting marks the beginning of Corot’s mature style, and is a synthesis of the Classical subject, drawn from the French tradition and learned in Corot’s years in Italy, with the softened contours and subtle light drawn from Corot’s experience of painting the softer light in northern France. In Corot’s later treatment of the subject in our Ronde des Nymphes, contrasts tend to be more accentuated than in Corot’s earlier work. The deep, cool shadows of the trees contrast with the vibrant, warm light of the open landscape. The frolicsome movement of the figures stands out against the calm, Italian landscape. The delicate, thin washes of paint in the landscape highlight the rich, painterly impasto on the figures and clouds at center. Forms are at once dissolving and yet sculptural and immediate. The archetypal Italian landscape is reconciled with a more misty light and dense atmosphere of northern France. Corot’s ability to resolve these elements is unique among his contemporaries. He is at once one of the great artistic innovators of his age and also firmly grounded in the grand tradition of Poussin and Claude Lorraine. It is the force and singularity of Corot’s vision and his re-invention of the French Tradition that made Corot the father of French landscape painting and paved the way for the birth of Impressionism.