Charles-Emile-August Durand was born in Lille, France in 1838. He studied for two years under François Souchon, a student of David, and fell under the spell of the old masters to whom he was exposed at the Lille Musee des Beaux-Arts. In 1853 he went to Paris, took the name of Carolus-Duran, decided against additional academic training, and began instead to paint from the Old Masters at the Louvre. This was a very bold move for a young artist beginning his career, as the rule of academic painting was still very strong and the need for association with the studio of an established painter was considered essential to success. Indeed, Carolus-Duran struggled in the beginning, and after returning to Lille for financial reasons he was able to earn enough money painting portraits (for which his old master studies had prepared him) to return to Paris in 1859 and concentrate of working from life at the Académie Suisse.

At this time he befriended Henri Fantin-Latour who introduced him into the avant-garde circle that included Edouard Manet, with whom Carolus-Duran shared an interest in both realism and Spanish art. His most accomplished work at this time was large-scale realist compositions that reflected strongly the work of Gustave Courbet. Traveling to both Spain and Italy, the artist continued to absorb the more painterly traditions that appealed to his natural sensibilities much more than those of the French academy. He debuted at the Salon of 1866 with a work sent in from Italy and, by 1869, achieved official recognition with his first important portrait, Woman with a Glove. This established the artist as a portrait painter with a keen insight and access into fashionable Paris and the women who contributed to its allure.

Perhaps the most important contribution made by Carolus-Duran to the art world of the nineteenth century was the atelier he established while enjoying his success. Small, personal, and somewhat controversial, it attracted students who were disillusioned by conventional academic training, and won a particularly high regard among young American painters such as John Singer Sargent, Theodore Robinson, J. Carroll Beckwith, Irving Ramsey Wiles, and many others. 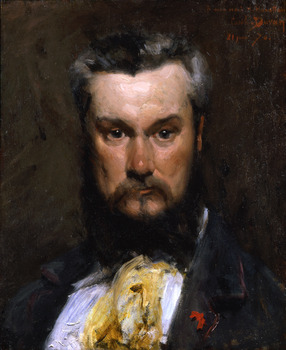 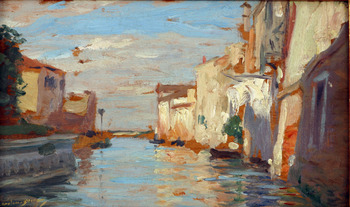