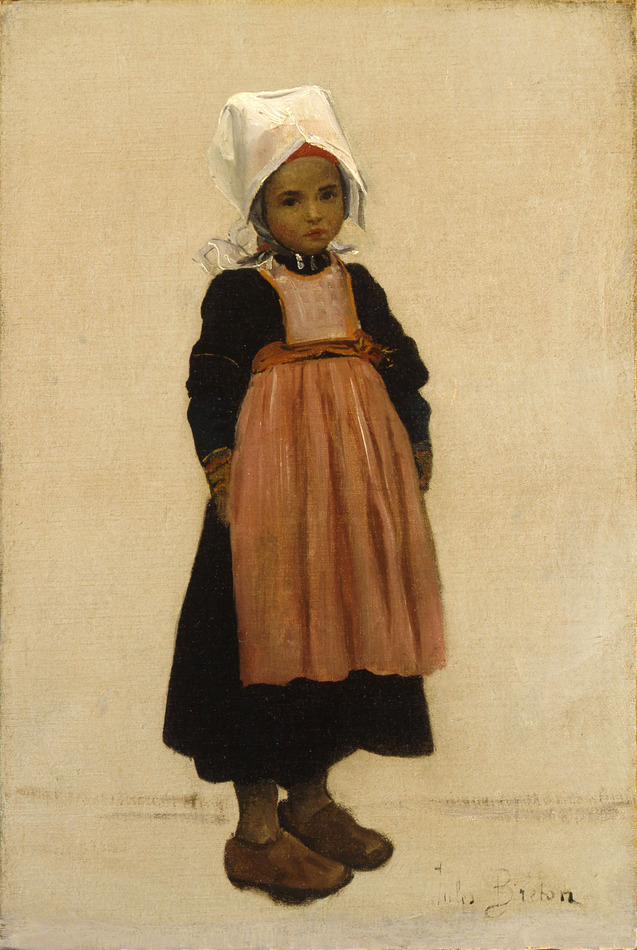 The present work is a study for the figure of a young Bretonne in A Great Pilgrimage in Brittany (Un grand pardon Breton, Salon 1869), now housed in the Museo Nacional de Bellas Artes in Havana, Cuba. Breton made his first trip to Douarnenez in Brittany in November of 1865. He was taken by the highly devout, even fanatical nature of religious practice in the region. He returned again in August of 1868. It was during this second trip that the artist attended a religious procession at Kergoat, a village near Douarnenez, which later became the subject of Un grand pardon Breton (1869). He later wrote, “At Kergoat you are taken over entirely by a very profound sensation.” It was this somber, mystical sensation that Breton hoped to capture in his large canvas. In it, he depicts a group of men, dressed in black costume, with somber expressions and lit tapers in hand, leaving a chapel. They are surrounded by an expanse of women, their traditional white headdresses creating a sea of silver and white. Breton produced numerous single figure studies for the final canvas, each focusing on the particular expression of the figure, whether devout, mournful, introspective, curious, or innocent. Petite Bretonne is one such study. The girl is depicted immediately to the left of the main procession, lighting her taper from the candle of a woman whose back is turned toward the viewer.