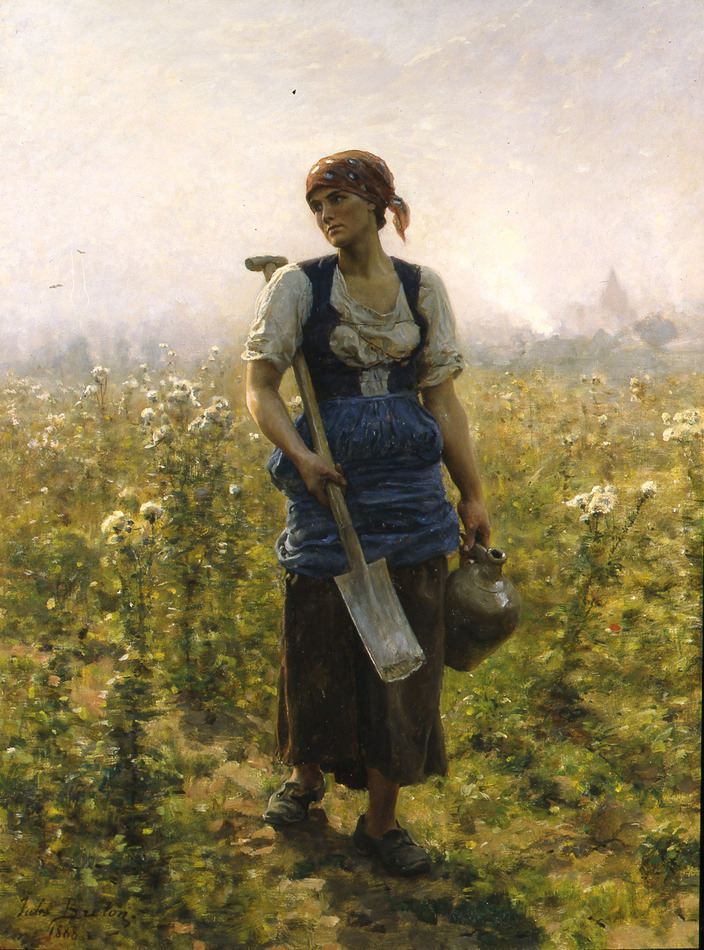 This work is accompanied by a certificate of authenticity from Annette Bourrut Lacouture and will be included in the Breton catalogue raisonné in preparation by the same author.

The peasant woman presented in Le Matin is a developed version of the central figure in the Salon work Across the fields (A travers champs, Salon 1887), now housed at the Brooklyn Museum of Art.

Le Matin was ordered by M. Knoedler & Co. in the early spring of 1887, along with a pendant, Le Soir. Le Matin was completed in the second part of September and beginning of October 1887. The artist added the last touches to the canvas on April 24th and May 11th, 1888 and dated the work accordingly (1888). According to his wife’s diaries, the painting came very easily and satisfied Breton. The model is Catherine Bibi, the same model used for the central figure in A travers champs (Salon 1887). Bibi was also the model for Le Soir, which, in its first version, became L’Etoile du berger (1887) (Salon 1888), now in the Toledo Museum of Art, Toledo, OH. Then, in 1888, Breton painted a third work, which became Le Soir, (currently at the Phoenix Art Museum, Phoenix, AZ, on loan from the Merideien Trust) as the true pendant to Le Matin. Le Soir represents a woman bearing a potato sack, after the second figure of the group in A travers champs. Both works were sold to Knoedler in June 1888.

The present work was etched in 1889 by Lionel Le Couteux, whom Knoedler regularly used for etchings (re: Le Couteux’s letter to Jules Breton for a “remarque” by the painter, March 18, 1886). It is possible that Knoedler sold Le Matin to Madame Brière later, since there were numerous movements of works between Paris and New York through M. Knoedler & Co.1

1 We would like to thank Annette Bourrut Lacouture for providing this information.