Although she was one of the most celebrated animal painters in France during the Second Empire, Rosa Bonheur?s renown was even more widespread in Britain and America than in her own country. She made her fame on several large works executed early in her career which were exhibited internationally. Her father, Raymond Bonheur, a social radical, painted portraits and landscapes and taught drawing in Bordeaux. All five of his children became artists as well. In 1828 Raymond Bonheur moved to Paris to further his career and was followed there by his family the next year.

After exhibiting in 1855 Haymaking in the Auvergne, acquired by the Luxembourg, she ceased almost entirely to enter works in the Salons, although she was represented in the 1867 Exposition Universelle by nine works, including Sheep by the Sea belonging to the Empress Eugenie. In 1858-59, Rosa Bonheur bought a chateau in the hamlet of By, near Fontainebleau, which provided her with adequate space for the large menagerie of animals that she used as models. There she remained with her constant companion, the still life painter Nathalie Micas, producing her animal subjects, many of which were sold abroad through her dealer Gambart. Late in her career she turned to American western subjects, inspired by the 1889 visit to France of Colonel William F. Cody (Buffalo Bill) and his traveling show. Among her many awards was the Cross of the Legion of Honor presented to her personally in her studio by the Empress Eugenie, membership in the Antwerp Institute offered in 1868, the Leopold Cross, and the Commander?s Cross of the Royal Order of Isabella the Catholic, both presented in 1880, and elevation in 1894 to the rank of Officer of the Legion on Honor. 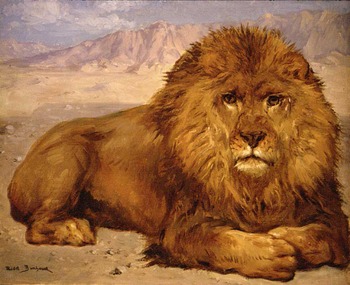 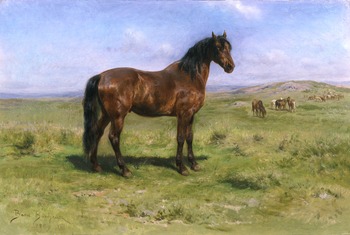 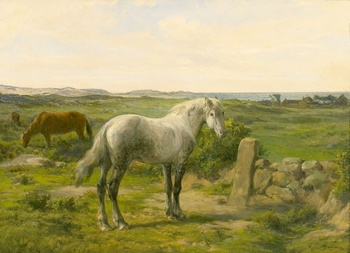