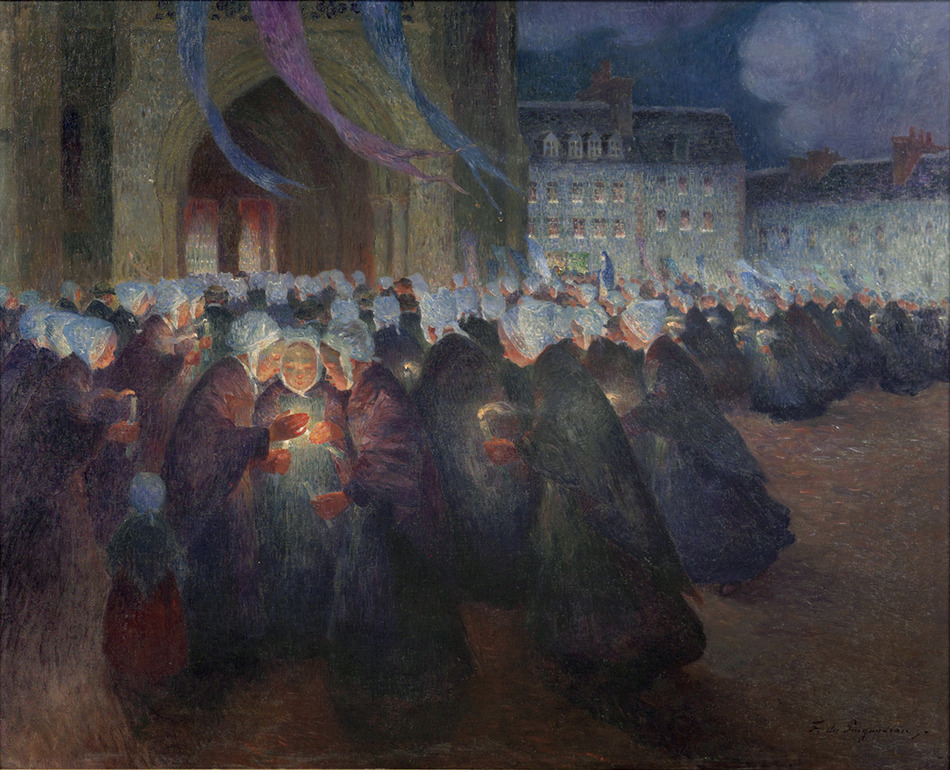 In Procession de nuit à St. Pol de Léon Puigaudeau treats to outstanding effect one of his favorite themes: the mystical qualities of a candlelight procession in a nocturnal setting. Saint Pol de Léon is situated on the northern coast of Brittany, almost directly north of Pont Aven. A famous Breton spiritual center since the 13th century, the first railways to the village were built in 1883, giving access to the growing number of artists working in Brittany. Drawn by the devout traditional religious practice of the region, artists traveled from Breton village to village, recording the many processions and pardons. The Processions began in Europe during the middle ages, the three most famous Processions were associated with the the Tro Breizh Pilgrimage in Brittany, the Santiago de Compostela Pilgrimage in Spain, and the middle-age pilgrimages to Jerusalem. The Processions were part of traditional religious ceremonies called Pardons, which, in Britanny, celebrate the patron saint of a church or chapel and involve the granting of indulgences. The Pardons begin in March and end in October, but the majority are between Easter and Michaelmas on Sept 29. Pilgrims from all over Brittany attended these Pardons, clad in their best costumes which were often only worn for these occasions and at weddings. The Pardon began with early mass at 4 AM, and the greater part of the day was spent in prayer. After the religious service, a great procession took place around the church. This was the most picturesque part of the Pardon and the event that drew artists from around France to Breton villages. For example, the Procession at Ste-Anne d'Auray was said to be especially impressive, attended by all of those who believed that the intercession of St. Anne had saved them from danger: Sailors carried fragments of their shipwrecked vessels; the injured carried their crutches on their shoulders; those rescued from fire carried the ropes or ladders which they had used to escape the flames. Processions were followed by a large feast in honor of the corresponding saint.

The Procession de nuit depicts the culmination of one such procession outside of the Saint-Pol-de-Léon Basilica-Cathedral. Groups of women, each participant holding a lit taper, congragate outside of the cathedral. Blue and violet banners wave above the Basilica for the occasion and an icon of the virgin is carried towards the lit entrance. Every element of the composition has a flowing, unstable quality, from the shifting masses of women to the long banners and billowing clouds. The candelit scene is painted with an overall blue cast flecked with warm dashes of light and color which give even the solid walls of buildings and the Cathedral arch a fluid, ethereal disposition. A critic commenting on the painting during its 1903 exhibition in Nantes wrote:

The Procession de nuit à Saint Pol de Léon, no. 335 by M. du Puigaudeau is quite striking. If one was standing in front of the church one would believe that the girls and the women were pushing and bumping into each other having a great time blowing out and then lighting their candles. It is a real symphony of blues. Everything is blue, the sky, the houses, the head-dresses, the gowns. For tackling such a difficult composition M. du Puigaudeau is due praise as he has captured movement, light and space within the confused and disorganised mass of bodies. 1

While multiple Pardons may have occurred at a given location during the course of a year, the primary Pardon at Saint-Pol-de-Léon was part of a broader pilgrimage called the Tro Breizh (Tower of Brittany). This is a tour of Brittany that passes through seven towns where Christianity was founded by the Breton Saints: St Brieuc, St Malo, Dol-de-Bretagne, Vannes, Quimper, St Pol-de-Léon and Tréguier. Tradition has it that the walk was done in order to guarantee entry into Heaven. The Pilgrimage dates to the 9th-century, and Bretons of the time considered it as important as the Santiago de Compostela and the pilgrimage to Jerusalem.