Jean Ferdinand Monchablon was a landscape painter who focused his subject matter on the Vosges region of France where he was born and lived. While many of the great landscapists of the previous generation, such as the Barbizon painters, traveled throughout France to capture its various regions, during the 1870s and 1880s it became common for artists to remain close to home and become specialists on the distinctive qualities of their native landscapes. Monchablon was no exception, and he composed an oeuvre of crisp and luminous works depicting the quiet rivers, open pastures, cool forests and gently rolling hills of area immediately surrounding his native village of Chatillons-sur-Saône. His landscapes often depict broad views of the region, and evoke a strong sense of the structure of each individual site. Topography and the distinctive characteristics of are rendered with such precision that certain sites may still be identified in the present day. Still, Monchablon’s landscape views serve as more than simple visual records of the village: Monchablon was exceptional in his ability to depict the subtle tonal gradations created by soft, clear sunlight. His landscapes often give the impression of a window, so strong is their clarity of light and color.

Monchablon exhibited regularly at the Paris Salon from 1881 and received silver medals at the Expositions Universelle in 1889 and in 1900. He also exhibited internationally, participating in exhibitions such as the Carnegie International Expositions in Pittsburgh. He was named Chevalier of the Legion of Honor in 1905. 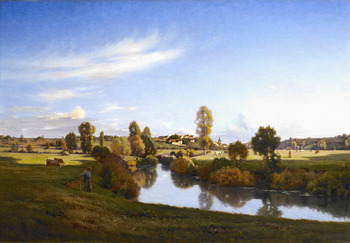 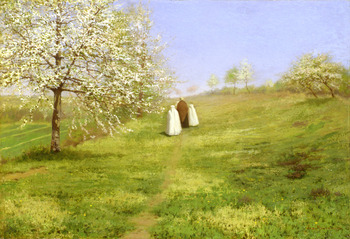