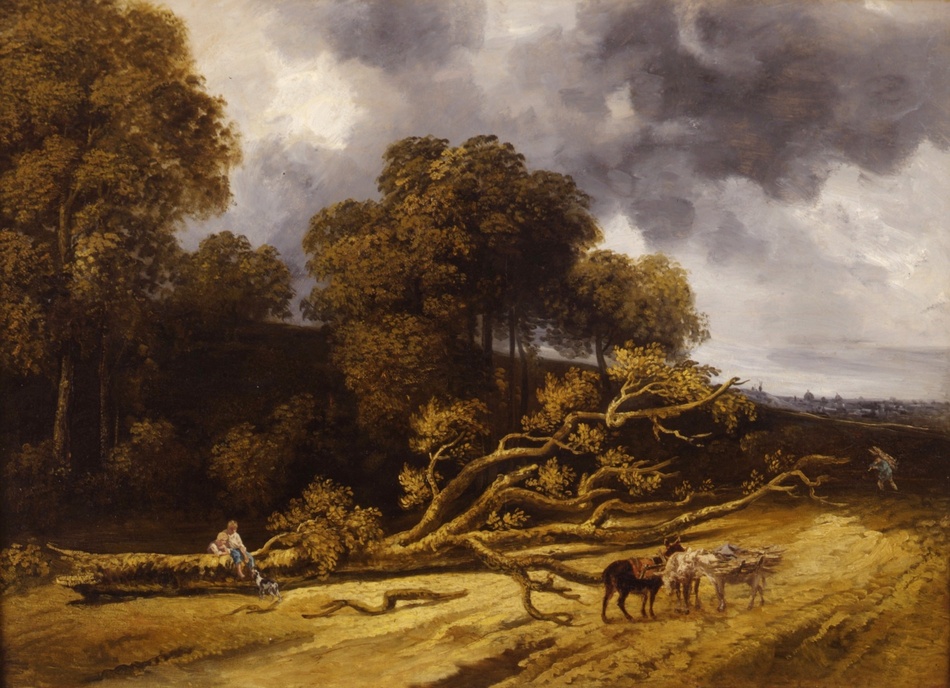 A Certificate of Authenticity from Michel Schulman accompanies the painting.

The art dealer Jean-Baptiste-Pierre Le Brun authorized Michel to copy the seventeenth century Dutch paintings that were in his shop, and was, in a way, very responsible for the artist’s further artistic development. In 1791 Michel debuted at the Salon, where he continued to exhibit regularly. Nevertheless, critics ignored Michel, considering his works too similar to those of the Dutch masters. Around 1800, Michel was employed by the Musée du Louvre to restore their Flemish and Dutch paintings, and it was in this capacity that he developed a true understanding of the technique of his predecessors. In 1808, he decided to set up a studio and give lessons, but he stopped teaching the following year. In 1813 he opened a shop adjacent to his studio and sold furniture and paintings. He exhibited for the last time at the Salon of 1814. After the death in 1820 of the last surviving of his eight children, he left Paris to stay for one year in Picardy. After his return, he began to live a reclusive life and gradually withdrew from the art world. Because of his self-imposed artistic isolation, Michel had to rely solely on the patronage of the Baron d’Ivry, who purchased almost his entire output until 1830, when the two men had a falling out over political differences.

Michel always painted within a small area limited to the surroundings of Paris. He commented that ‘whoever cannot paint within an area of four leagues is but an unskilled artist who seeks the mandrake and will only ever find a void.” His preferred locations were Montmartre, where he was inspired by the famous windmills, the plains of Saint-Denis, the villages ofVaugirard, Grenelle, Montsouris, Romainville and Le Pré-Saint-Gervais. His small plein air studies were often drawings heightened with watercolor wash, which were then used as preliminaries for paintings worked up in the studio. His career can be divided into three phases. The first, until circa 1808, includes the period of his collaboration with Jean-Louis Demarne and Jacques-François Swebach, artists who often executed the staffage of his landscapes. Later he developed a more personal vision, in which light and treatment of the sky and space became his principal concern. His paintings became more unified compositionally, with vast expanses of landscape and wide perspectives under stormy skies. The windmills are often the sole accents punctuating the compositions. After 1830 he was at the peak of his talent. His style became even more lyrical and visionary, his brushstrokes broader and his paint thicker. He reinforced the dramatic tension by accentuating the heaviness of the skies and the contrasts of light and dark.