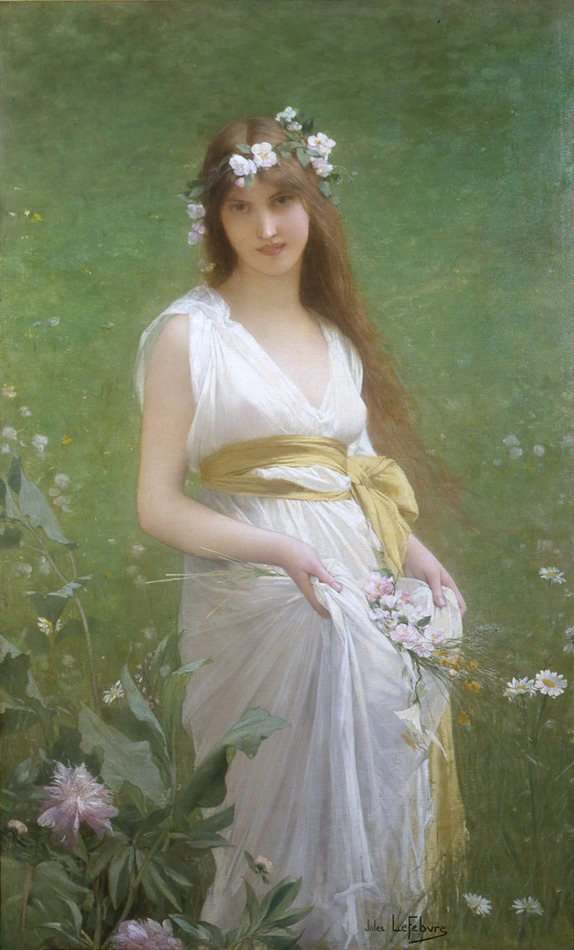 While elegant young women remained Lefebvre’s preferred subject throughout his long and distinguished career, his beautiful sitters remained sensitive to the dominant esthetic tastes of the day. In the late 1880s and 1890s, as the Symbolist and Classicist mode of artists such as Puvis de Chavannes or Gustave Moreau supplanted the Naturalist or exotic tendencies of earlier decades, Lefebvre’s work shifted accordingly. The present work, most likely of this period, presents an allegorical figure of Springtime crowned with a wreath of pale blossoms and carrying fresh stems in the folds of her classical gown. Despite the idealized, symbolist subject, Lefebvre’s commitment to painting from life is evident in the very specific, crisply painted flowers and foliage and in the translucent tones of flesh and fabric.

It is sufficient to just mention his name in order to immediately evoke the memory and the image of the thousand adorable creature of which he is the father…. An unusually skilled draughtsman, Jules Lefebvre better than anyone else caresses, with a brush both delicate and sure, the undulating contour of the feminine form. 1

Lefebvre won medals at the Salons of 1865, 1868, and 1870. After the last, where he exhibited his famous nude Truth, now in the Musée d’Orsay, he was made a Chevalier of the Legion of Honor. His success only grew and he won a first class medal at the Exposition Universelle of 1878 and the grand prize in 1889. In 1891 he became a member of the Institute and in 1898 was made a Commander of the Legion of Honor.