Gustave Jacquet’s first and only official teacher was William Adolphe Bouguereau, whose influence was evident in Jacquet’s early work. The young artist debuted at the Salon of 1865 with an allegory, The Dream, a painting that one could easily mistake for a Bouguereau. In the following years he developed his own unique style of genre painting based on the technical mastery he had acquired from his teacher. The works were small and evoked in great detail the elegant life of the l6th, l7th and l8th centuries. In his review of the 1878 Exposition Universelle, Edward Strahan said of Jacquet ‘s method:

His painting, as full of sweetness as of science, is mounted equally on two epochs. He prepares observations on present things and plunges them into the past…. He culls the good out of every age…. He steals from the Venetians the splendor of flesh and the beauty of tissues. He takes from the Spaniards the firmness of line and the warmth of their tone. He bears off from the gallant painters of the eighteenth century their melting shapes, their graceful light and flowery color. Every master can teach him something, down to Bouguereau, in whose atelier he received his education….

Jacquet’s career was consistent throughout his life. He was a tireless worker, producing many paintings, each one done with beautiful and caring detail. His nudes were particularly gracious and feminine and his portraits capture the character and elegance of his sitters. Although his paintings weren’t filled with drama, they always showed sensitivity to delicate taste and beauty. 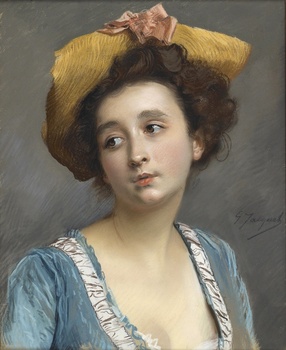 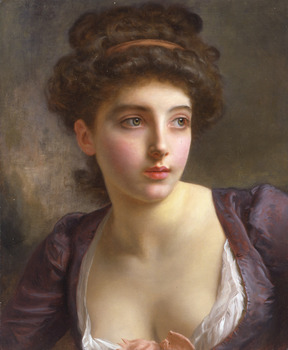