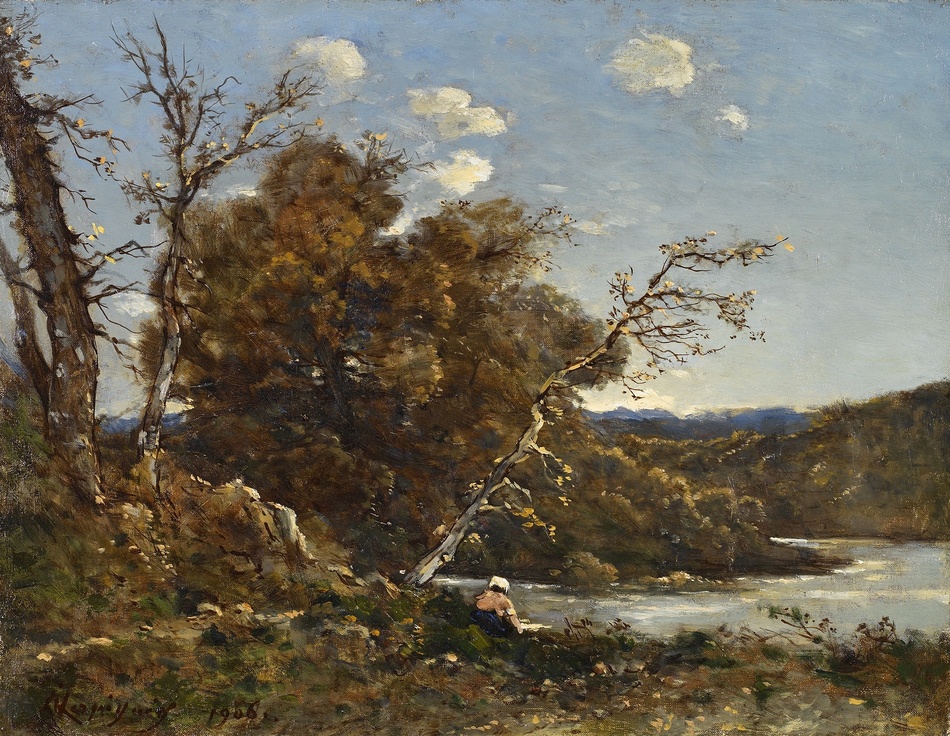 Autumn Landscape with Washerwoman at the River

Henri Joseph Harpignies was a widely acclaimed landscape artist both in oil and watercolor. Highly versatile in his approach to painting media, Harpignies completed major canvases in oil, played a major role in the revival of watercolor in France, and also worked extensively in pen and ink-wash. Born in Valenciennes on July 28, 1819, he did not start to paint seriously until the age of 27 when he became a student of Jean Achard, also a landscapist. Under Achard’s tutelage he traveled to Holland, Brussels, and Flanders to study the northern landscapists of the 17th century. Shortly after returning to France he left again, this time for Italy, where he met many of the artists of the Villa Medici in Rome. During this time, he became interested in the work of Camille Corot.

In 1852 Harpignies returned to France to establish his own studio in Paris and met the artists Jean-Léon Gérôme and Jean-Louis Hamon, both of whom were at the beginnings of their careers. A year later he moved outside of Paris to continue painting en plein-air, where he met Daubigny, Diaz, Dupré, Millet, and Rousseau – all first-generation members of the Barbizon school—to paint in the countryside near Fontainebleau Forest. In the early years of his career from 1853 through 1856, Harpignies, under the influence of Corot and of the Barbizon painter Constant Troyon, experimented with figural compositions, but very quickly he shifted his focus to pure landscapes. Harpignies made his Salon debut in 1853 and continued to exhibit regularly thereafter, winning medals in 1866, 1868, 1869, the Legion d’honneur in 1875, and the Grand Prix at the Exposition Universelle of 1900.