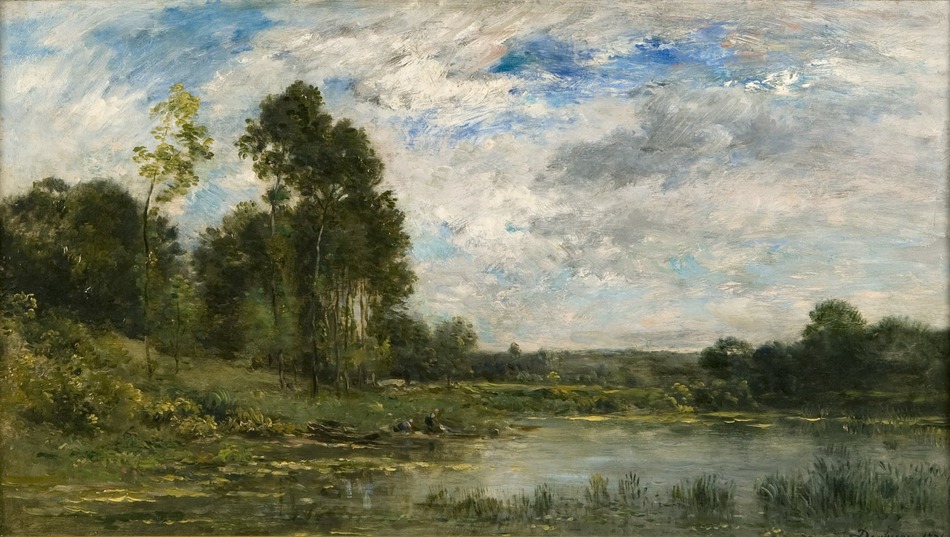 An exceptionally brushy and expressive late work by Daubigny, Lavandières au bord de l’Oise, has been part of highly important American collections. It was owned by Mrs. Montgomery Sears (Sarah Choate), an accomplished photographer, painter and art patron who was a friend of both John Singer Sargent and Mary Cassatt. Sears amassed an important collection of Impressionist, Post-Impressionist and American paintings, and was credited with instituting the rage for Cezanne in America. Sargent completed portraits of Sears and of her daughter Helen, which now hang in The Museums of Fine Arts, Boston and Texas. The painting then passed, possibly via Knoedler, to Emil Winter of Pittsburgh, one of the great American collectors of Barbizon paintings. Winter (1857-1935) was president of the Workingmen’s Savings Bank and Trust Company in Pittsburgh and was head of a number of metal production companies. He had a large overseas plant in Austria, for processing manganese ore and was one the founders of the Pittsburgh Steel Company. Paintings, sculpture, silver, antique furniture and tapestries, and fine oriental carpets adorned his Pittsburgh estate, called Lyndhurst. When his collection was sold after his death at Sotheby’s Parke-Bernet in 1942, it included over 100 paintings by leading Barbizon and Realist painters, including Courbet, Corot, Rousseau, Diaz, Troyon, Dupré, Jacque, Lhermitte, Fantin Latour and Boudin.